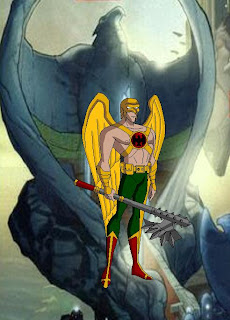 It's time once again for another installment of the Hawkman Families! In this series, web artist NightwingTAS has created a series of Bruce Timm/Paul Dini styled characters for use in theoretical DCU animated series. And this being the blog that it is, we are looking at the fantasy series Hawkworld!

"Charley Parker never knew who he was until he died. When one of the Wildebeast Society killed him Charley had a near death experience where he seen the truth of his life before the Nth Metal snapped him back to life. Charley is the son of Fel Andar and Sharon Parker, the two of them were known to the world as Carter Hall Jr and Sharon Hall, and better known as Hawkman and Hawkgirl."

Golden Eagle is an odd character to me. I don't know much about him, and have never read any of his appearances. I have the Volume 4 trade where he makes his, ahem, big splash back in the modern era, but I haven't gotten there yet. His origins are a strange result of continuity calesthenics, as DC tried to twist and contort everything to fit in the Post-Crisis era. I don't know that I would even try to tackle that in a "DCAU" style show, when the hallmark of those shows was thei ease of digestion. (Entries for Fel Andar and Sharon Parker are forthcoming. Not sure how the HECK they will work, either.)

As far as a design, though, I can get behind this one. The Honor Wing-less helmet makes sense for a young man still getting started on his heroic journey. I also like the big spikey axe-thing, which looks like it would fit in nicely on the pages of Savage Hawkman, ironically. The different chest symbol is a good touch -- clearly Charley is part of the Hawk legacy, but his own man as well.

I still think that having the character of Golden Eagle can work as part of a streamlined Hawk story engine, but I question whether a Golden Eagle with this origin can really work. What do you folks think? Does Golden Eagle fit in with this sort of series?

Be sure to click through below and check out the other Families Posts today!

Golden Eagle was that guy who always inspired me to say "oh yeah, I guess Hawkman does have some sort of pathetic nth-string legacy." I first heard of him when he was killed... by a Wildebeest... in the EXTREME '90s. There's pretty much nowhere to go but up, and the Gray/Palmiotti Ch'al Andar retcon was a step in the right direction.

I like the basic wingman design used here better than his ugly, overly ornate standard costume. I dig the wristbands, the modified chest emblem, and the wickedly impractical ma-w-ax-baton. I think a rival Hawk House of Andar would be cool.