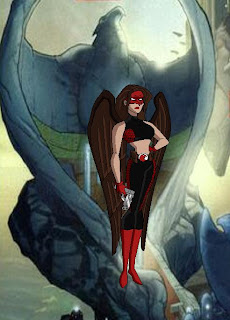 We're back with another installment of the Hawkman Families thanks to NightwingTAS. After the retcon-rific last few entries, I don't know what to make of this one. Falcon? Isn't he a Marvel character? Read and be enlightened...

"Sasha Martens grew up as a Military Brat. Her father, Colonel Michael Martens of the U.S. Air Force, came from a long line of military men. When Sasha was a child, she thought she almost died of leukemia and was cured with an experimental drug from the government.

When Sasha met Wiley Wolverman at his rock concert for his local band known as the Doves. A riot broke out, Sasha and Wiley escaped the mayhem together. Sasha and Wiley learned they were both part of the same military experiment and searched for answers to their past at a nearby military base. Discovering Dr. Thurber Avian's "Operation Raptor," Sasha learned that civilians were used in these experiments. Sasha and Wiley encountered a bird-man creature while accessing the files, and soon the military police arrived and a scuffle ensued. Sasha and Wiley eluded the police and retreated to Wiley's apartment. Upon awakening, Sasha and Wiley sprouted wings, which they learned to mentally control, manifesting or retracting into their backs. They vowed to track down Dr. Avian as the government began to hunt them as fugitives.

Sasha and Wiley were told by Dr. Avian that they called him insane all the while exploiting his research. He claimed that all the others were failures but them, because the Godwave coincided with their developement. But Dr. Avian wasn't fully honest with them, neglecting to mention that he was actually a H'San Natall agent sent to locate the sleeper agent from his Avian Race of the H'San Natall, and furthered their research into human/H'san Natall hybrids.

After the Blackest Night Argent followed leads that lead her to Dr. Avian, who she made tell her about the Avian H'San Natall. He told her that Sasha Martens was the actual hybrid and that Wiley Wolverman was enhanced and healed using her DNA. Argent found Sasha and informed her of who she really is which lead Sasha to fly away. Sasha found Dr. Avian and forced him to expose his true self, their battle caught the attention of Golden Eagle who stopped Sasha from taking Dr. Avian's life. Using an orb left on Earth by his father Golden Eagle contacted Thanagar and set up an exchange for Dr. Avian for the lifting of the grounding of his parents.

Sasha was lost, everything she ever knew was a lie. Charley Parker held his hand out in friendship, telling her his story. The two spent time together and with Charley's urging Sasha joined the Teen Titans East and decided she wanted nothing to do with the name hawk and took the new name Falcon."

Grafting the Hawk & Dove mythos into the Hawkman mythos is not an idea I can endorse. And doing it with a pair of losers best left forgotten is even worse, as far as I am concerned. The bird motifs are not interchangeable, and the backstory as presented here is so convoluted that I can't imagine anyone caring one lick either way. I liked what Sterling Gates and then Rob Liefeld did with Hawk & Dove in the New 52, and what is teased as continuing to unfold, but this little mash up is best left to the wayside.

Visually, Sasha looks alright. I like the use of the handgun which stays true to her time in the comics as Hawk. The criss-cross pattern on the red looks really strange though. I am reminded of the Python Patrol, and as cool as the Python Patrol is, I don't think it is appropriate for someone named Falcon to have a snakeskin pattern on their uniform. Yeesh.

Let's just move on and check out the other Families Posts you can find today...

Just to be Siskel to your Ebert, I'm going to go the opposite way here. I like that N:TAS found a new role for a forgotten character to play in the Hawkverse. Where Sasha Martens would clutter the duo dynamic of Hawk & Dove, she could fit on Hawkworld. I like this variation on her mini-series costume, which makes her both fit better and stand apart from her TAS peers. She definitely needs a name not trademarked by Marvel Comics since the Johnson Administration that's soon to be used in a blockbuster movie sequel, and I don't see the point in shoehorning the H'San Natall when there's a Hawkgod to exploit, but I figure Falcon is one of N:TAS' best offerings so far.