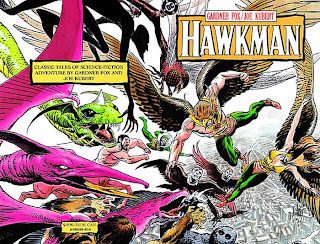 Popped into my LCS this week in order to pick Collider #2, after discovering that the name had been changed to Federal Bureau of Physics, which is just plain strange.  That not withstanding, I also perused their 50% off table, now more reasonably appointed with short boxes full of trades instead of the previous "piles of crap" look.  Besides digging up 6 volumes of Sandman (leaving me with only 2 more for the full run... woo, the 90s!), I also found this little gem!

Featuring 6 issues of The Brave And The Bold, this volume collects Joe Kubert's work on Hawkman in the Silver Age, all of which are written by Gardner Fox.  Of course, I have all of these issues in collected form already (in the, ahem, essential Showcase Presents: Hawkman v.1), but for a measly $10, getting these stories in color was a must-buy for me.  These early tales, besides being downright gorgeous of course, set the stage for the Silver Age Hawkman.  We also get the debut of the Shadow-Thief and Matter Master, plus classics like "Earth's Impossible Day" and "The Creature of 1000 Shapes!"  No way to pass this one up.

The seemingly controversial Villains Month will fast be upon us, and to help hype the series of one-shots focusing on the baddies of the DCU, DC has released a series of previews for them.  The one of primary interest here at Being Carter Hall is Justice League of America #7.3: Shadow Thief.  Here's the two preview pages:

Interestingly, looks like Shadow Thief is going to be tangling with a Thanagarian Wingman or Warrior... her origins were terrestrial in the pages of Savage Hawkman, so I am curious as to how she is connected to them.  She is trying to root out aliens on Earth after all...

So what do you think about this upcoming spotlight on Shadow Thief, or on Villains Month in general?

Justice League of America to End Spring 2014, Move To Canada!

So, among all of the debate regarding Ben Affleck playing Batman, this little tidbit snuck out of FanExpo Toronto -- Justice League of America is ending in the Spring of next year, and will be replaced by the Jeff Lemire written Justice League of Canada.

No word on what will be happening with the existing cast, so I don't know if Hawkman will be sticking around north of the border or not.  I can say that without a shirt on, he might get a little cold, since it is unclear if the Nth Metal would still keep him warm like it did pre-New 52.

More intriguing is the announcement of the return of one of Hawkman's traditional allies, making his debut in the New 52...

Granted, they are creating at least one brand new Canadian hero for the series, as well as bringing one lost hero into the New 52 for the first time - now as a Canadian - Adam Strange.

Adam Strange!  Now that I can get behind!  Making him Canadian is no big deal in my book -- we all know that Adam's "real" home is Rann, so swapping his nationality is not a big deal to me.  I am just happy to see him make a come back.  Under Lemire, I imagine that the space hero will get a chance to shine, as he seems to have a knack for tertiary characters as we have seen in Justice League Dark.

So what do you think of this news?  Intrigued, baffled, or maybe a little of both?
Posted by Luke at 10:29 AM 3 comments:

Well, folks, I told you that you know a blogger is lying when they promise to post more.

In my lame defense, there has not been much to be excited for in regards to Hawkman lately.  Yes, the Winged Wonder has been a part of the Justice League of America title, but unfortunately his "part" has been quite small.  Johns has chosen to focus on other characters -- including Catwoman, Martian Manhunter, Amanda Waller, Steve Trevor, Stargirl, and Vibe -- over Hawkman, meaning that his position in the title is mostly relegated to backgrounds, fight scenes, and the occasional macho one-liner.  (Strangely enough this also applies to Katana.)  So while I am enjoying the book -- and the Trinity War story -- there has not been a whole lot to really blog about.

The November DC Solicits did provide us with this listing, however:

THE SAVAGE HAWKMAN VOL. 2: WANTED TP
Written by TOM DeFALCO and ROB LIEFELD
Art by JOE BENNETT and ART THIBERT
Cover by JOE BENNETT
On sale DECEMBER 4 • 288 pg, FC, $19.99 US
Hawkman is closer to discovering who he really is and why he is being hunted, but with deadly assassins at his throat, he may never learn the entire truth! Collecting THE SAVAGE HAWKMAN #0 and 9-20!

The positive is that all of Savage Hawkman is going to be collected.  I liked this run of the title, personally, so I am happy to see DC put it all together.  Maybe these stories will find more of an audience in a collected format than they did as single issues.  Joe Bennett still remains one of my favorite Hawk artists ever, and his entire run in one volume will be very pretty.  And with her spotlight issue coming out next month, it is nice to see the new Shadow-Thief's debut reprinted in the collection.  And that's a good page count for the price, a full 13 issues for $20 (before discount).

But the negative flows right from that price point as well.  It's pretty plain to me that DC is dumping this out with a low price point just to get the material collected and try to squeeze something out of it.  Price this at $25 and it's an automatic pass for most readers; putting it at the $20 price point and maybe you'll get a few impulse purchases and get some sort of profit off of this material.  Material which I devoured eagerly when it was published and hyped and boosted as best I could.

That's a depressing thought.  But it's the reality of Hawkman as a solo star right now.

So, instead of being brought down by that, I continue apace, ready to crack more Golden and Silver Age Hawkman comics for my reading and (hopefully) blogging pleasure.  And hopefully someone out there who is curious about the Pinioned Powerhouse will pick this volume up and decide, hey, there's something to this Hawkman guy after all.

(Aside: Really, DC?  The Flash is a Zero Year tie-in?  Really?  Just go ahead and change your name to "Batman Comics" and be done with it already...)
Posted by Luke at 8:49 AM No comments: