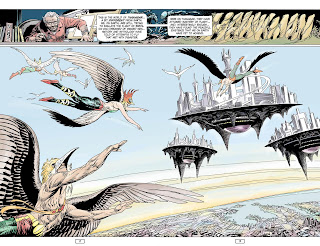 Hawkfans are getting an extra treat this month as tomorrow sees the first issue of Joe Kubert Presents being released by DC.  The late comics legend is one of the artists who handed the Winged Wonders in both the Golden and Silver Age, and Hawkman figures into this anthology of Kubert stories.

As a fan of Kubert's work on his superhero, war, fantasy, and other properties, to say that I am looking forward to this series is a gross understatement.

Newsarama has a preview which you can see right here, and the book should be on the shelf of your Local Comic Shop tomorrow.

I'm holding off from checking out the preview. (It would be like sneaking a peak at a Christmas present several times over.)

I'll be there tomorrow when the local comic shop is opening its doors.

It's nearly enough to make me weep. To me, this is so self-evidently wonderful that I simply can't comprehend why DC hasn't stayed with this version of the character. I suppose both DC management and most fans consider Kubert's Silver Age-ish vision quaint. A last hurrah. Farewell, Joe. I would have paid a LOT for a few Superman: Earth One-style volumes of THIS.