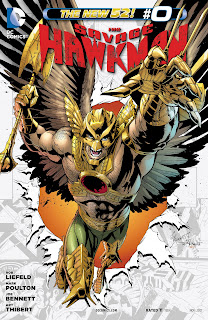 Summary: On Thanagar, a long period of war has finally ended, with the Thanagarian emperor Thal Provis ushering in a new era of peace.  Surrounded by his family, including his son Corsar, his daughter Shayera, and her lover (and Thal's adopted son) Katar Hol, he welcomes representatives from many worlds to Thanagr to celebrate the new peace.  Corsar is a haughty warrior, proud of his status, while Katar is more reserved, preaching humility.  But despite their differences, the two regard each other as brothers and both serve their father well -- it is under Katar's advice that Thal begins the path to peace.

The glory is short-lived, however.  One of the empire's new "friends," the Daemonites, secretly unleash a virus called The Plague on Thanagar, and grounding the inhabitants as their wings wither and die.  Thal Provis does not survive, and the mantle of leadership is passed to Corsar.  The new ruler sees an opportunity, and is advised by the heretical Great Old Ones to recover the legendary Nth Metal.  Katar advises against this, but supports his brother.  In the Kolarmoran region, a sample of Nth Metal is recovered, but shortly afterwards the entiring mining rig collapses, trapping and killing hundreds of workers.  Katar claims the cost is too high, but Corsar and Shayera ask what is a few lives compared to the survival of the entire race?

Corsar becomes more and more obsessed with the Nth Metal, and arming his warriors with armor and weapons made of the material.  During one argument, the Nth Metal seeks out and bonds to Katar, forming his familiar Hawkman uniform and restoring his wings.  Corsar sees this as validation of this course of action, and orders more mining.  The mining operations are met with similar setbacks, including a Kolamoran slug eating an entire rig.  Corsar, desperate to mine more of the metal, lashes out at Katar, accusing him of treason.  Katar defends himself, calling Corsar a tyrant.  As the two tussle, Corsar lunges at Katar, who dodges.  Corsar's Nth Metal sword impales itself into a computer console, and is electrified, dying instantly.  That is the choice moment when Shayera enters the scene, and demands that Katar be arrested for murder.  Katar flees with the armor, stealing a Thanagarian vessel and disappearing.  Shayera says that she never stopped searching for him, and now that she has found him, she wants to pay him back for the pain he caused her -- with the death of a loved one.

Review: First things first, it's quite refreshing to get a cover from someone other than Rob Liefeld again.  And Bennett's cover is quite striking, with Carter/Katar coming right at us.

Also, it seems that the naming of Katar's former love as "Sheyera" in #12 was a simple mistake, as she is called "Shayera" here throughout.

I liked this issue.  I thought it was an interesting change on the more traditional alien Hawkman origin as a police officer.  Here, he Katar is a man of peace and tolerance, a far cry from his "smash first, ask questions later" approach both before Flashpoint and here in the New 52.  But by divorcing itself from the previous Thanagrian origins, it does an admirable job of trying to cover new ground rather than rehashing the past.

The change does raise a lot of questions for me, including the obvious one of "just how the heck did he make it to this point psychologically?"  Of course, there are some other issues as well -- what the heck happened to his Thanagarian ship, for one.  Does he have it hidden away somewhere like in Volume 4?  Or perhaps it is sitting in geosynchronous orbit like the Silver Age?

Some oddities: Is Thal Provis (and Corsar, for that matter) a King, or an Emperor?  I guess both?  The titles are used seemingly interchangeably throughout.  Also, are all Thanagarians born with wings?  Traditionally, Thanagarians typically looked human, and wore artificial wings, save for the Downsiders anyway.  The presence of organic wings reminds me of the Justice League cartoon.

The art from Bennett, Thibert, and Major is top notch once again.  The trio really get to flex their muscles this time out, with alien species and environments on display.  There is one panel flashing back to the war which shows the heavily armored Thanagrian troops with their angelic white wings which looks simply fantastic.  Shayera is still blonde this time out.  I am neither totally sold on nor totally opposed to; the only thing I will say is that with her haircut and the color of her tresses, she reminds me of Cassie Sandsmark, facially.  Which is really neither here nor there, but there you go.

The dialogue is a little on the grandiose side, but as this is a flashback to the royal family of a race of winged, imperialistic aliens, I am willing to let that slide.  The plot was straightforward but sensible.  I also really liked the continues fleshing out of the alien races of the New 52 DCU -- with the Daemonites playing a big role in the downfall of Thanagar.  I imagine that Katar will be playing a good sized part in the inevitable showdown between Superman and Helspont in the coming months and years.  I did like how the dialogue showcases Shayera's mixed emotions: in the one sense she agrees with her brother about the greatness of Thanagar and the cost of restoring that greatness, but on the other hand she also counsels Katar about Corsar's motives and what Katar perceives as arrogance.  Then her fury at the end, which is not a good sign for Katar in the next issue!

Overall, this was a very strong issue which I think did a good job of telling the origin of our new Katar Hol/Carter Hall and setting the stage for "Hawkman: Wanted."  The few niggling complaints I had didn't take me enough out of the story to spoil it, so I am pleased with this issue.

Note: As you can see on the Generations, this is the New 52 Katar Hol and Carter Hall.  In keeping with the way which I handle the Silver Age books, going forward our hero will be tagged as "New 52 Katar" until or unless there is some reason that "New 52 Carter" makes more sense.  At least, that is my thoughts; what do you folks think?