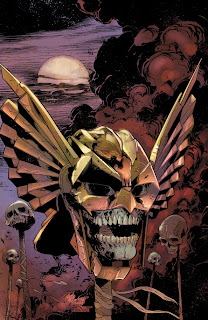 DC's Justice League family solicitations are up over on Newsarama for the month of January, so that means the new solicit for The Savage Hawkman and Earth 2!

THE SAVAGE HAWKMAN #16
Written by FRANK TIERI
Art and cover by JOE BENNETT and ART THIBERT
On sale JANUARY 30 • 32 pg, FC, $2.99 US • RATED T
• "HAWKMAN: WANTED" crashed to its conclusion!
• Carter Hall can't escape his past!
• Two worlds collide — with Hawkman caught in the middle!

Looks like it is indeed Frank Tieri after all who will be picking up the reins from Rob Liefeld.  I am perfectly fine with this turn of events given my past enjoyment of Tieri's work on characters such as Iron Man and Hercules.

The art team is, for now, the same.  I personally am hoping for this crew to stay on for the foreseeable future, but who knows with the way that art teams shift around at DC these days.  I also want to mention that the cover itself is beautiful.  So nice to get a non-Liefeld cover once more.

The solicitation text itself is pretty coy, but from the bit about Carter not being able to escape his past, that suggests to me that his past will become a known entity.  Between this story and what is going down with Hellspont over in Superman (including the Annual), it seems that Carter's alien origins may not be a secret for very much longer.

And over on that alternate Earth, we have the following...

Okay, all I have to say is that Yildiray Cinar and Art Thibert look like one hell of a team.  I had said that I would love to see Cinar on a Fantasy or S&S title ever since first seeing his work on Firestorm, and this cover -- with who I am assuming is Mars (Earth 2 using the Roman gods) and the "last Amazon" -- looks like it would be just as much at home in the pages of Sword of Sorcery.  Fantastic (no pun intended).

Who is the "last Amazon?"  Donna Troy, perhaps?  Artemis?  Someone new?  I have no clue.  Robinson's world building so far with this title have been really quite impressive so I am very much looking forward to seeing what he has in mind for this new Amazon.

No information in this bath of solicits on potential "Fourth Wave" books, although I suspect that DC may be holding this until the end when they reveal the full solicitations.  At the very least there should be a replacement for GI Combat, which was solicited with "FINAL ISSUE" last month.

So what do you folks think?  Do these sound like books worth reading to you?  Or will you pass?