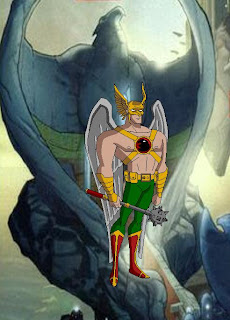 If it's Thursday, it must be time for more Hawkman Families courtesy if NightwingTAS! And considering the sorry state of my blog at the moment (October has been insanity... pure insanity...), I am very glad for his efforts! Take it away, maestro...

"Fel Andar was born on and raised on Thanagar as a part of the planet's defense against the H'San Ntall, as a Human/Thanagarian hybrid. Fel was sent to Earth where he assumed the name Carter Hall Jr, the son of the original Hawkman and Hawkgirl. While on Earth Fel Andar fell in love with a human woman named Sharon Parker, and the two were married. Shortly after they debuted as the third Hawkman and Hawkgirl. The two had a child, Charley, which they kept to themselves. When Charley was 4, Fel Andar was called into duty when the H'San Ntall abducted 9 Earth woman. Fel had to return to Thanagar, to answer for how the H'San Ntall had been able to achieve this goal. Not wanting to let him go Sharon wanted to join him, but Fel feared his son growing up on Thanagar and being trained as a property of the government to be used as he had been. Sharon agreed, and they left him in care of family, who they didn't know had shipped him to an orphanage shortly after."

The inclusion of Fel Andar makes sense, considering that Golden Eagle was included previously. If you have the son, figures to have the father, right? But the problems of a character like Fel Andar come to the forefront when you lay it all out in the open and examine it. He's Thanagarian guy who pretends to be the son of two humans and becomes a superhero and marries a human girl who becames his superhero partner, and so on? It gets a bit convoluted as we go, yes? But that's his deal, I suppose. I think there is a story to tell with him, but I think in a setting like this, he would require some changes. Maybe have him move in as the "new" Hawkman while Carter and Shiera were off-planet? Or something like that, I'm sort of shooting from the hip. It's hard with a character like Fel Andar, a retroactive inclusion, to make sense of it in a streamlined sense for a TV series. Maybe he would only appear in flashbacks in episodes focused on Golden Eagle? Maybe?

Changing the color of the straps and adding the gauntlets is not really all that creative from a visual standpoint. If I was going to include Fel Andar in a Hawkman-centric animated series, I would have changed his look somewhat, more akin to how Hawkman looked in the later pages of Volume 3, with the blue uniform. I think that would work, and it would visually differentiate the two Hawkmen more.

Check out the other Families Posts today as well!

I think this is exactly how Hawkman himself ought to look.

I always thought Fel Andar was a fun idea, since he's basically the hypercritical jackass from JLI in most reader's minds, so he serves as both a scapegoat and saboteur. I don't imagine Tony Isabella fans are too fond of him, but as retcons go, I thought he was cool. Also, he was necessary to pre-Zero Hour continuity, and it was cute how he was eventually used to set up Golden Eagle's heel turn. These fanfic posts were constructed pre-New 52, so they were valid in their time.

That said, Fel Andar would by necessity be a completely different animal in a truncated "five year" timeline. He could still replace Hawkman briefly and have sire Golden Eagle, but the timeline would have to be seriously reconsidered. I dig him, but would advise a massive reworking to make him relevant to the new continuity.

There simply is not enough difference in this costume for anyone not trained to examine it for minutia to see this as anything but Hawkman. Even pre-nU, he'd need far greater distinction. It might have been fun to play up the "Carter Junior" angle by giving him the Golden Age mask with the angry beak and tongue, which always seemed transgressive anyway. Maybe give him archaic weapons not associated with Hawkman, like a scimitar or a sickle? A color change would also be in order. Hell, put him in a variation on the '93 suit, maybe using silver in place of gold, but keeping the villainous black?