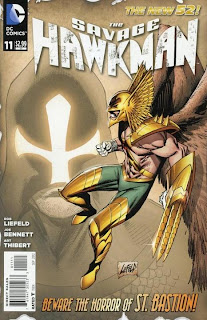 Summary: Carter and Emma arrive in Rome and meet up with a priest who is the Catholic Church's leading scholar and expert on all things angelic.  Carter presents the priest with alien documents which detail extraterrestrial encounters on Earth which potentially undermine the Church's stance on the existence of angels.  The priest gets very angry, and suddenly the heavily armored knight St. Bastion crashes through a stained glass window and attacks Carter!  Armoring up, Hawkman and St. Bastion clash repeatedly, two battering rams smashing into one another and causing tons of collateral damage.  Hawkman has the physical and agility edge, but Bastion's non-stop pursuit and jackhamer like offense keeps the two combatants matched.  Emma ends up punching out the priest and accidentally setting the Cathedral on fire.

The battle continues to rage between Hawkman and Bastion, axe and gauntlet against sword and shield, until Hawkman is able to anticipate Bastion's lunging attack and knock his opponent unconscious.  Hawkman and Emma make their escape, deciding between them that someone set them up, since Bastion was lying in wait for them the entire time.  They do not have much time to consider this, though, as Hawkman is shot in the chest by the operative Pike!

Review: A slam-bang done in one issue.  This is the type of issue which would not be out of place in the 70s, 80s, or 90s, but is something of an abberation in this decade.  Carter and Emma show up someplace, trouble starts up, and then it's a superhero battle.  I'm sorry folks, but you don't get more distilled superhero story than that.  At the end of the day, this story is a success because it executes a complete and classic comic book story in 20 pages and does it without being ironic or ashamed of itself.

Liefeld turns in a very straightforward story but one which does what needs to be done and works well.  Hawkman's internal monologue is very nicely realized, as he contemplates the nature of fanaticism, and what it means to be fighting a fanatical opponent.  This ties strongly with his actual combat actions, and continues Carter's almost academic point of view to the adventures he is having.  It's a novel take for a guy who has seen as much as Carter has and is as informed from a culutural standpoint as Carter.

The art is amazing.  I cannot say this enough about Joe Bennett and the rest of the art team. St. Bastion embodies his fury perfectly, and Hawkman looks fantastic month in and month out.  The damage caused by the brawl is excellently rendered as well, with debris flying everywhere as the two combatants tear down the Cathedral.  Just beautiful all around.

This issue was extremely enjoyable and the cliffhanger was great.  Good comic all around.