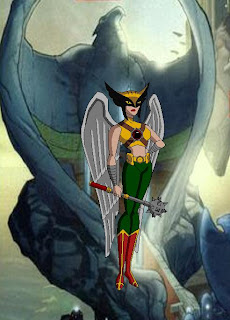 We're back with another installment of the "Hawk family" from NightwingTAS' proposed Hawkworld TV series. Gee, I wonder who this week will be?

After Hawkman, of course up next is Hawkwoman. The two just go together, like peanut butter and bananas. (What? It's tasty.) As a character rich in both comics and animation history, Ms. not-just-Hawkman's-sidekick is a character who has come into her own in the last decade. Let's get to know this new version of our favorite feathered heroine.

"Once she returned Shiera Hall embraced her true love, husband and soulmate Carter Hall. Shiera returned with a unique perspective, just as Carter recalled all of his past lives, so does she, but she also recalls her time bonded with Kendra, but not the emotions. Shiera does not know that Kendra herself was falling in love with Carter. "

I really like keeping the setup from the end of Blackest Night and the whole of Brightest Day. Long time readers will recall that I gushed like an MSNBC operative at the DNC when Shiera Hall was resurrected, and salivated at the potential of that pairing. Brightest Day delivered on that promise, and so I as such I would not object to more of that particular pairing.

The overall design is clearly based on her Justice League appearance, albeit with a more severe helmet, and adopting Shiera's resurrected look, with the straps across her chest and the midriff baring shirt. I was never crazy about that particular get up -- the straps combined with the belly shirt form an odd jumble of lines -- and this look doesn't really change my mind for it. Her breasts look a little squished, for one thing. I think either/or would have been alright. Kendra wore the belly shirt and looked fine, and if Shiera wore her normal costume just with the common design element of the cross straps, it would have been fine.

All things considered though, it's a snazzy design for Hawkwoman and one which would look great streaking across the screen smashing baddies in the head.

Be sure to check out the other "Families" posts today, and come back this time next week for another installment!

I never really got into Kendra, who is back to being the only Hawkgirl option. Lose the belly shirt and give us Shiera back!