Hawkgirl In The Spotllight in Earth 2 #7 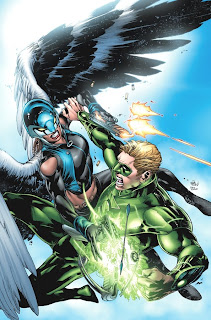 We have another Hawk-related solicitation today, and despite being on a completely different vibrational frequency, they are both part of the same preview!

EARTH 2 #7
Written by JAMES ROBINSON
Art by NICOLA SCOTT and TREVOR SCOTT
Cover by IVAN REIS and JOE PRADO
1:25 B&W Variant cover by IVAN REIS
On sale DECEMBER 5 • 32 pg, FC, $2.99 US • RATED T
• Who is Hawkgirl? The secret is revealed!
• Mr. Terrific makes his first appearance on Earth 2 since he left our world!
• Don't miss the aftermath of "THE GRUNDY APOCALYPSE!"

I know I am way behind on the Earth 2 write ups (heck, I am still behind on my Savage Hawkman review for #12), but after the very subtle revelation at the end of #4, I am more interested than ever in discovering Hawkgirl's origin.  That the other plots are continuing to build is further icing on the cake.  This book has been a blast so far and I get the impression that Robinson is just cutting loose and having fun, and the result has been some really great comics.  That Hawkgirl was among the first of the new "Wonders" to debut on the planet is a strong endorsement from Robinson as far as I am concerned, and so far she has shined in the scenes she has taken part in.

And I'll tell you what, our Winged Wonder certainly looks nice rendered by Ivan Reis, huh?  Although Nicola Scott makes her look really good on the insides of the book each month as well.

Are you enjoying Earth 2?  What do you think of our new Hawkgirl?