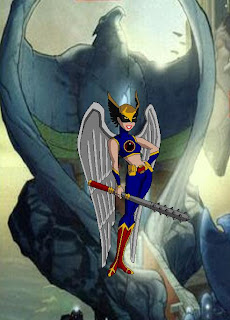 We're back once more in the world of NightwingTAS' theoretical Hawkworld animated series, starring the whole family of the Winged Wonders. Today's entry is something new, something different, so let's take a look and see how our new family member takes wing.

"Mia never knew her mother was Kendra Saunders, let alone that she was Hawkgirl. Kendra gave birth to Mia when she was really young and gave her daughter up for adoption so she may have a better life. What Kendra didn't expect was that giving her up would lead her life into a downward spiral that included her trying to take her own life, which bonded her soul and her Aunt's to be bonded for years until the Blackest Night. During the Blackest Night, Mia found out who her birth mother was and decided to become her sidekick taking on the name Hawkling. Mia and her mom are starting to form a bond which is filling a space that had remained empty in both their lives."

Interesting take on giving Kendra more of a family, and continuing the expansion of the Saunders/Sanders clans. Hawkling sounds like the kind of Teen Titans character which Golden Eagle was never going to be. My main problem is the ages. Kendra was always portrayed as a young woman; would she be old enough to have a teenaged daughter? Even if she had her early in life, I never pictured Kendra being even 30. So the ages get fudged a little bit here.

I'm not thrilled with the midriff (again) but the blue is a nice color, a good compliment to all of the green and yellow, and it helps Mia stand out from the other designs we have seen so far. Her big spiked flail is a good weapon. It reminds me of Bruce Timm talking about how on Batman: The Animated Series they made a point to have Batgirl be a brawler and not use little dainty attacks. Same idea here, I think, as Hawkling doesn't get a sophisticated, subtle weapon, instead choosing a heavy bludgeon as her tool of the trade.

In any event, I think this addition to the Hawk "family" is one which has some merit. The Hawks have, as I said, never really had a good Teen Titans aged member, and Mia here looks like she could fill that role nicely.

I haven't followed Kendra's career all that closely, but like you I always figured that she was on the younger side. I guess if she got knocked-up at 12 she could have a mid-teens daughter before hitting 30, but I doubt anyone has ever fancast Lauren Graham in the role of Hawkgirl. I thought she was a Latina, which isn't exactly the best way to represent a super-minority. The blue makes Hawkling look like she's cosplaying amidst the Batman Family. Even the name Mia too closely recalls the last Speedy in the Green Arrow clan (a problem I had when "Conner" Kent stole Ollie's son's name.) All in all, I wish N:TAS had appropriate the old Team Titan character Redwing in place of the contortions required to produce Hawkling.

I liken the blue to be the equivalent of Speedy wearing red to compliment Green Arrow, personally. So I think that's alright.

Thinking about it last night, especially with the name Hawkling, I think this character may actually work better as a pre-teen, like Reed and Sue's kids over in FF, or the Power Pack. It makes the ages work better, at least.

Redwing? Does he have the ability to summon Big Red, leader of Hawkman's feathered friends from Hawk Valley during the Silver Age?