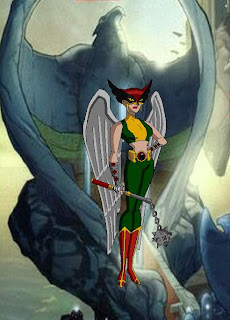 We're back for another installment of NightwingTAS' "Hawman Families" images, this time taking a look at the "modern" Hawkgirl, Kendra Saunders. How does she fit into this new take on the continuity?

"Leading up to the Blackest night Kendra Saunders felt feelings for Carter growing, but was unsure if they were her own, or those of her Aunt Shiera. When the two were seperated and Shiera's soul was reunited with her body and brought back, Kendra realized that the feelings were her's, which conflicted with her feeling for Arsenal. During the Blackest Night, the Black Lanterns went after the families and loved ones of the heros which included Kendra's daughter Mia, who up until that point had no idea Kendra was her mother. "

Visually, Kendra doesn't look that much different from Shiera, which is not surprising considering how much Shiera's modern look was based on Kendra's uniform. The main difference is the use of green over the yellow which was on Shiera's look. I would have given her a spear or other non-bludgeoning weapon, but that's just me. I do, however, like the gauntlets, a very Rags Morales touch for Kendra.

As for her character... eh. I don't know how I feel about Kendra pining for Carter while he and Shiera are off being the premiere Power Couple on Hawkworld. It's an interesting take, but I never like female characters who are defined by how they feel about a man.

Considering Kendra's frail mental state before her aunt's spirit inhabited her body, I imagine a reborn Kendra would be similarly troubled. There's stuff to mine there, I think, but it might be outside the scope of this project.

Be sure to check out other Family posts today as well!


Image: Hawkgirl, 2010, NightwingTAS, Image Retrieved from Super Buddies.
Posted by Luke at 6:00 AM

I think Katar/Carter in this world should have such wristbands, too, with or without the knuckle-dusters; his arms seem too bare without them.

I kind of disliked the Shiera design, and now realize that it was just a stripped down version of Kendra's. Let a Thal be a Thal, and Kendra can kick it this way. Much prefer the idea of a self-destructive and/or liberal rebel Hawkgirl who's in Katar's face rather than longing for his lips.

@Juss, yeah, I knew those were a pair of cestus, but I had a brain fart.

@Frank, The Kendra I knew would never pine away for any man. She's rather smash someone or something in the face and take what she wanted. So I'm with you.