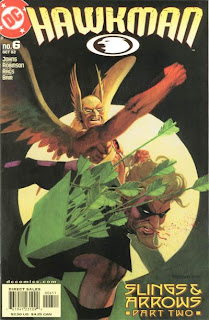 Summary: The murders -- via arrow impalment or the results thereof -- of several prominant residents brings Green Arrow to St. Roch.  The Hawks witness the latest attack as it happens, and Hawkman confronts Arrow, thinking him the perpetrator.  The two former teammates blast one another verbally, as Arrow explains that he is being framed.  All of the victims were part of a business deal gone sour on some land south of St. Roch, of which Arrow was an investor.  Seeking one of the surviving investors, the Hawks and Arrow come across The Spider, who's father was the Golden Age adventurer/criminal also known as The Spider.  Hoping to rub out all of the other investors to get all of the money from the sale of the property for himself, Spider and Arrow being a furious back and forth duel.  Spider is put down for the count after the Hawks double-uppercut him, and then Arrow wounds him in his aiming eye.  The plot stopped, Arrow and Hawkman make their tense and unfriendly goodbyes, but not before Arrow advises Hawkman to get out of the helmet and wings every once in a while.  Carter takes Arrow up on his advice, and cleans up very nicely to take Jayita out on the town -- much to Kendra's surprise.  Meanwhile, Spider physically pushes himself to regain his aim and be able to extract revenge.

Review: The appearance by Green Arrow is very welcome, and Ollie plays a bit of the reader's devil's advocate, asking the questions that we were thinking, including "when was the last time you took off the helmet?" and "what do you know about love as opposed to obsession?"  The interaction between the two heroes is downright hostile, with Hawkman flat-out telling Arrow to stay out of St. Roch at the end.  Not that Hawkgirl is much nicer -- she tells Arrow that she can smell a "dog in heat" from a mile away, and that she was forewarned about him by Black Canary.  The setup for the story was classic but treated well (a hero... framed!), and the interaction of the three stars really made this one worthwhile.  I am still undecided on what level of animosity I like between Ollie and Carter.  Here, their bickering even extends into the battle ("You're in my line of sight!"  "Then find a new one!") and really does demonstrate Carter's inflexibility.

This is why I couldn't get into the last two Hawkman solo series. It's one thing to be influenced by the Satellite Era, but quite another to treat Hawkman as a massive jerk in perpetual jerkdom. Remember when the Hawks were called back to Thanagar in the late 70's/early 80's, and Ollie shed a tear for them? That couldn't possibly happen Post-Crisis.

Here's what I don't understand:
Green Arrow was reconceived as a bleeding heart liberal, took a hard right turn in the 80's, but has been a largely centrist lefty since his resurrection, to reflect modern sensibilities.

Guy Gardner was reconceived as a right-wing nutjob during the Crisis, which worked magnificently. Him, they now tone down to make more palatable.

Hawkman, on the other hand, has been written as the foaming-at-the-mouth, hypercritical neocon "Fel Andar" since his brief association with the JLI. One writer after another has treated him as a negative caricature instead of a character, and the depiction has only become more extreme with time. WTF?