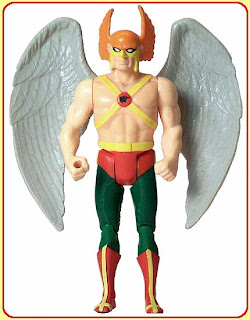 The Super Powers Collection really brings me back to my childhood, as between my brother and I, we had nearly every figure from the line.  Regularly mixed in with our Secret Wars toys, superhero battles were regularly scheduled affairs, when not staging epic military or furry underpants struggles, or promoting all-star wrestling cards.  My brother and I were both of the persuasion that once a "guy" belonged to one of us, he pretty much stayed there until disinterest or whatnot.  My core group consisted of Flash, Aquaman, Martian Manhunter, and Doctor Fate, who would usually fight Darkseid and Lex Luthor, as they were "my guys."  One such guy who belonged to my brother was Hawkman.  I remember the toy well -- he never got much use that I saw from my brother, and I really dug him for his big wings and the fact that he had a mace to hit people with, but, alas, he was not my guy, and so I let it slide.

Fast forward a number of years and all of the Super Powers (along with the Secret Wars and later Toy Biz figures) are in my possession, thanks to a general cleaning out and packing up of toys and whatnot.  So I finally got my hands on Hawkman, mwuahaha!  So since that day in high school, he (along with all of his mates in the box they have been packed in, unpacked out of, and repacked in since that day) has traveled with me, from my parents house in New York to my first apartment in South Carolina, to my wife and I's first house to our current home.

And he certainly is a toy worthy of such mileage.  His large size -- both height and width, thanks to his wing harness -- makes him standout from the crowd in group shots, and his sculpting is pretty dead-on.  The bright, vibrant colors which helped make this costume a classic in 4 Color form translates easily to the three-dimension world.  As I said, I have always really liked his mace, which on my particular toy remains firmly grasped in his right hand, not lost or misplaced like many other accessories (I would kill for Aquaman's trident, or Manhunter's cape; I am pretty sure I have Fate's).  The power action works wonderfully, and doesn't interfere with poseability, or the all-important stand-up-ability, either.  If you are talking classic, Silver Age Hawkman, this is him in the flesh (that is, plastic).

This is my favorite Hawkman toy which I have ever seen or had the pleasure of owning.  And while there are several new versions coming out soon, I think it will be very difficult to top this iteration of the Winged Wonder.

Image: Super Powers Collection Hawkman, retrieved from Toyotter.
Posted by Luke at 7:30 AM

The great thing about not having grown up with my half-brother is that if I wanted a guy, I could go buy him, rather than having to defer to someone's "ownership." Two of the same guy when we played together just meant Zartan was on the loose!

Hawkman fell under the same category as most of my super-hero action figures: cannon fodder. For some reason, I kept buying super-heroes, but refused to invest the same interest in them as the super-heroes I "created" out of other figure types. I couldn't even work with the Mighty Crusaders toys, so obscure I never read any of their comics until after they'd all been stolen/lost/destroyed. I'm sure that Hawkman's fate ended up in the hands of one of my less trustworthy barrio playmates.

Darkseid though-- man I loved that figure. Those "light up eyes" and the sculpting were just killer. I got a lot of use out of Lex Luthor as a general bad guy as well, but only the later Toy Biz "Hugh Hefner" model that liked to punch himself in the eye.

I don't recall if I ever had a Flash, and Dr. Fate "vanished" before long. Ironically, I never owned an Aquaman figure before the Total Justice atrocity was given to me.

Oh, and for my money, the DC Direct Hawkman & Hawkgirl set were the best figures of those characters ever made. I've still got them around here somewhere...

one of my favorites of the first wave of Super Powers figures. if only they had made a Hawkgirl...

I can see your point Frank, but to be honest, having an older brother and thus having the concept of "guy ownership" did have it's benefits too. I mean, it made your guys all the cooler. Flash, for example, was supremely awesome, and he was all mine. Mine do you hear?! Mine! Same with Darkseid -- man those glowing eyes are killer. Plus, ownership did change over the years. As new series came out, I would inherit some older ones -- one reason why some of my favorite Joes are Breaker, Zap, and Flash, despite the fact that I was 2 when they were first released. (Gung-Ho is the greatest ever, of course.)

Is this the DC Direct set you are referring to? They do look pretty cool, though I don't recall ever seeing them in person.

What the SPC toys lack in articulation and to a certain extent detail, they make up for with design aesthetic. There's a reason why so many of these DC characters are iconic. And I am a weirdo who even likes some of the Superfriends-exclusives or original characters, such as Samurai and Golden Pharaoh. In fact, if I ever had the chance to write the Justice League (HA!), I'd introduce Samurai as the new character who joins up in the first story.

A Hawkgirl would have been a nice addition in retrospect, but I don't hold it against Kenner for not doing one. I mean, girl figures never sold all that well back then, right? The first time I remember a female action figure really being something to seek out was Batman Returns Catwoman, and that was, what 1992?