Over on CBR, the first image of the new Earth 2 Hawkgirl has been revealed, and it looks like our favorite Wingwoman is getting a snazzy new take! 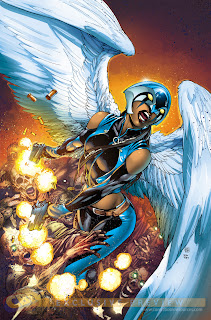 According to Earth 2 scribe James Robinson: I'm excited for readers to see this new Earth 2 version of Hawkgirl," Robinson told CBR. "As the co-creator of the original Kendra Saunders, I've taken pains to keep the essence of her personality while adding a more two-fisted quality to her as well. I'm also enjoying developing another aspect to her, in that with the absence of Batman, she must also step up and become the great detective of Earth 2. I hope readers will enjoy watching her find her place in this new world as a part of this new team of heroes.

Sounds to me like this new Hawkgirl will in fact be Kendra Saunders, which makes sense considering Robinson is writing the title. And the idea of Hawkgirl as a detective is both a brilliant expansion of Kendra's character (who in the early days of JSA used her noggin along with her brawn) and a fabulous spotlight role in a series which is rapidly shaping up to be a fan favorite.

The most striking aspect of the new costume is the colors! Blue and black makes me think of Aquagirl moreso than Hawkgirl, but I think it looks great and also visually seperates her from both Hawkman as well as all previous iterations of Hawkgirl. The helmet is streamlined and almost modernist, but I love the "Eye of Horus" effects around the lenses. Is she wearing makeup under her eyes, or is that part of the mask? Perhaps a cowl underneath?

Also, it seems that over on the alternate world of Earth 2, Hawkgirl is now Black! Or perhaps very tan (and dredlocked). No problem at all with this -- it's a new world after all, both in the context of the New 52 and then on Earth 2 in particular.

One last thing -- the twin automatic pistols. Besides making her look like she has been reading a lot of Lee Falk comics (zing!), the use of modern weapons is a good fit for Hawkgirl. Even as far back as the Silver Age, Hawkgirl tended to use modern weapons even as Hawkman would steadfastly hold onto his ancient ones. And of course, the Hawkworld-era Hawkwoman was well known for totting guns. So it makes sense to me!

So, what do you folks think of our first impression of this new Hawkgirl? Love her or loathe her? Leave a comment and share your thoughts!

Big thanks to Raul Cotto (@MASFUEG0) for hitting me with the link on Twitter!  You've earned your Honor Wings, Raul!
Posted by Luke at 7:56 PM

I think it looks awesome. The yes the color scheme is totally different, but as you said this a new world. I think DC's is going to see what "new" characters fly (lol) and if they do they will become apart of the reg universe.

I would not mind to see this new hawkgirl, but then again I am not a true die hard fan if the original. Love it or hate it many characters need to be updated and if it calls for a new person altogether at least give it a shot. Hawkgirl with Batman type detective skills sounds great to me!

Can't wait to see how this plays out! She seems so B.A.!

I think this might be the first time we've ever seen her wings displayed as white. I wonder if it was to match her new look or if there is a reason.

I was reminded of Lorena Marquez as well. Hopefully she'll maintain her JSA Latina qualities from last incarnation, since making her black would be an unnecessary alteration in the minority coin toss. Hopefully it also means there's still a Shayera Thal out there somewhere as a separate entity.

The points breaking the mask barrier remind me of the strands of hair that used to give Vixen catseyes. It's illogical, but looks cool, so keep schtum. I'm cool with the guns,as well. Color scheme will have to grow on me, and I'm pretty resistant to the design aesthetic of Earth-NU2.

I feel a lot more excited about Hawkgirl than I do Hawkman these days.

I dig the new look, costume colors (I miss Lorena), eyes, pretty much everything except the guns. Not a fan of superheroes with regular firearms. Especially since she isn't looking where she's shooting. Yikes!

If she's Kendra on Earth2, then Hawkgirl on Earth1 must be Shayera.

I wouldn't mind if she's latina, but I'm hoping that she's Egyptian. The helmet certainly makes it seem like they're emphasizing that element.

I also like the idea of making her a detective. An element that I always liked, but has been completely ignored in recent years is that Katar and Shayera were detectives. Katar was very much a winged version of Batman, but with a wider range of technology to assist him (from his medieval weapons to his Thanagarian devices).

Thanks for your comments, everyone! These developments over on Earth 2 are making it an exciting time to be a Hawkgirl fan. I love seeing the character strike out on her own and add to her own legend.

Real quick, Mr P, you make a good point about her possible ethnicity. Egyptian would be a logical avenue to take, for sure! And Shag, considering that at least one character has already called Earth 1 Hawkman "Katar Hol," then you may be onto something as well!