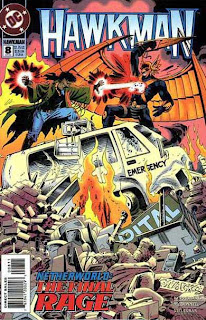 I'm working my way through Volume 3, in prep for "Way Of The Warrior," so here we are with the two parter "King Of The Netherworld."  And Mongrel is back.  Yay.

Back when I read the Hawkman Annual #1, I mused that I wanted someone who had actually lived a hard life to put Mongrel in his place.  Well, I don't know that Katar Hol has lived as hard a life as some other heroes, but he puts Mongrel in his place pretty good in this two part story which clears the deck of some aspects of the Ostrander stories and sets the stage for Bill Messener-Loebs to come in during the Zero Hour build-up.

Our story is as such: Mongrel, still angry at the entire world, goes to the Netherworld, where he tells (read: shouts) his intentions to lead the Netherworlders and get them a bigger piece of the pie.  Most of them aren't interested, prefering their independence, but enough follow Mongrel to form factions amongst them, and brawls begin to break out between the sides.  After Naomi sees a vision of Netherworld being attacked by a giant dog (subtle...), Hawkman interjects.  The battle escalates until Mustang Suzy is critically wounded, and dies at the hospital.  Mongrel attacks Katar in the hospital, and a few of his loyal metas steal a cache of drugs from the pharmacy.  As Mongrel and Hawkman duke it out, Mongrel's goons pass out the drugs, which they do not realize are tainted with a bacteria which is harmless to humans, but lethal to metas.  As the Netherworlders begin to drop like flies, Mongrel bemoans that this was not what he wanted and blasts away, leaving Hawkman to pick up the pieces of the decimated Netherworld.

Scribe Paul Kupperberg has a pretty inenviable task, trying to present the thoroughly unlikeable Mongrel as a character who waivers between sympathic and scummy.  His actions in this story pretty solidly cement him as "scummy" in my book, including essentially starting a bloody civil war amongst the Netherworlders, and then complaining that it was not his intention, or demanding that others follow him just because he says so.  He says things like this often while physically attacking others, including nearly destroying a hospital full of patients.

Kupperberg does a good job, however, in demonstrating how Mongrel's attitude effects others.  Shayera, for instance, calls him no better than a mad dog who needs to be put down.  Katar starts out feeling that Mongrel has the potential to be a good person but has been alone with his anger too long -- but eventually, Katar comes around to Shayera's thoughts, calling him a little wannabe dictator as Mongrel performs one careless act of violence after another.  Mongrel himself has a few moments of clarity, but they are too few and too far between.  He's a lousy character to try and push as an anti-hero.  He makes for a good (if whiney) villain in these two issues and he should have stuck to that route.

On the art, Luke McDonell and Ricardo Villgran are a good pairing, but I still miss Jan Duursema.  This is a personal bias, though, as I thought the crew did a fine job, especially with all of the strange Netherworlders.  Mustang Suzy, for example, looks fantastic, a true merging of metal and flesh.  The covers to both #7 and 8 are by Steve Lieber and Rick Magyar. #7 is nice as well other than the fact that Mongrel is the main character and Hawkman the secondary one. The cover copy includes the blurb "Mongrel Rules!" which makes me wonder if DC thought Mongrel would catch on the way that Carnage did over at Marvel.  The cover to #8 is very nice, as Hawkman and Mongrel battle it out amongst the rubble at the hospital.

All in all I did enjoy the story even though it was a "clear off the table" sort of tale.  I liked seeing Mongrel get taken down (even if he managed to slink away) and I liked Hawkman's coming around to the realization that this kid is a problem and not a victim.  There's a lot of good action, and dropping the Netherworld stuff is probably for the best as it has been more of a distraction than a focus in this volume so far.  Not the greatest issues in the world but considering the bad guy and the intention of the story this could have been a lot worse.  That sounds like faint praise, I but I dug both issues.

Onward to the Messener-Loebs stuff...