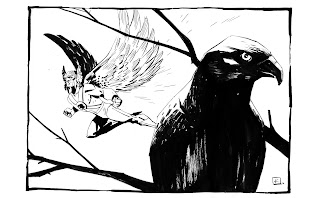 Our Hawkman sketch today is by Andy Kuhn, an extremely prolific comic creator, who has credits for writing, penciling, inking, coloring, and lettering, on titles ranging from The Adventures Of The X-Men to Cthulu Tales.

Hawkman definitely looks ready to fight in this image, his fists balled up and his arms cocked back like he is about to mess someone up. Nevermind the grimace. The smaller wings are an interesting take, making the figure look more compact; typically, Hawkman looks more hulking than his frame because of the wingspan. The raptor in the foreground is a nice touch as well.

You can check out more of Kuhn's work here.

Disclaimer: I do not own or have possession of this sketch. It is being reposted from the cited website only.

That's a really nice sketch. I like Hawkman's determined expression.