I've written before about my memories of the Super Powers Collection from my misguided youth. Well, the 25th Anniversary of the SPC is upon us, so it's high time we take a look at two of Hawkman's starring turns from the mini-comics which were included in the first few waves of the toyline! That's right, it's another Crisis on Earth-Blog crossover!

Summary: In Midway City, Carter Hall's evening is disturbed by a flock of crazed birds crashing through the window of his office. Quickly changing to his heroic identity of Hawkman, he investigates, finding his winged friends stealing pricess artifacts. Hawkman quickly spots the problem in the form of Lex Luthor's Lex-Soar 7 ship. The Winged Wonder swoops in to attack, but Lex zaps his wing harness with a laser. Falling, Hawkman is saved by the sudden appearance of Green Lantern and the Flash. While GL repairs Hawkman's wings, the Flash is trapped in an energy net from the Lex-Soar 7. Lex then sends a flock of crazed birds at Hawkman and Lantern, but GL quickly whips up hundreds of emerald bird cages to hold them. Hawkman then uses his wings to create a great burst of wind, which crashes the Lex-Soar 7 into a lake. Green Lantern hauls the ship out of the drink, Luthor is arrested, the artifacts recovered, and the birds revealed to be robots.

Review: Well, if you were a little kid who just got a Hawkman toy as a gift and had no idea who he was, this is a pretty decent primer. Sure, it leaves out the whole alien thing, and Hawkgirl is nowhere to be found, but for this basic adventure I can't complain too loudly. The art is simplistic but effective, and the script is basic enough for a child to follow easily enough. There's some nice co-sells for the other characters and the Lex-Soar 7, which is always nice, heh. Also nice is that Hawkman uses his action feature (flapping wings) to defeat Lex Luthor. Coincidence? Yeah I think not! I wonder how many kids read this comic and then became Hawkfans?

Summary: Bruce Wayne is hosting a charity ball, a guest of which is the "illustrious" Carter Hall. Things take a turn for the worse when the Penguin and his gang of highly trained birds attack the party and rob all the patrons! Bruce and Carter leap into action, changing into Batman and Hawkman. While the Winged Wonder calms Penguin's fiesty flock, Batman hits the Batmobile and gives chase. As Penguin and his goons gloat, Hawkman catches up to them and captures the gang in a net. Thinking he is now home free, Penguin is surprised by Batman, who uses the ejector seat in the Batmobile to launch himself up and grab the Bad Bird. With Penguin and his gang in the hands of the police, the heroes head on back to the party.

Review: What a classic set-up: a charity ball attended by the hero(es) gets robbed by the bad guy and they have to give chase? That's "Old School" my friends! A fun little showcase for all three characters, as each gets a chance to shine. Hawkman showcases not only his *wheet wheet* powers, but also breaks out an ancient weapon in the form of a net, which was a treat. But Penguin and Batman are the real stars here, unsurprisingly, and this depiction of Penguin as someone who would use a helicopter umbrella to rob a penthouse is charming and delightful. I also like the co-sell for the Batmobile, as well as the clever way of avoiding having to mention Robin (what would a kid be doing at a stuffy old ball, anyway?). I can really see this as a springboard story for kids to invent their own capers with their new Penguin action figure.

Notes: Hawkman also appears in the mini-comics for The Flash, Robin, and Red Tornado.

Also, check out my thoughts about the Super Powers Hawkman toy, one of the earliest posts I ever made here on Being Carter Hall. 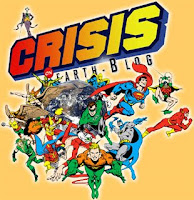 What would a crossover be without, well, crossovers? Be sure to go and check out these other fine superhero blogs and sites and explore the 25th Anniversary of the Super Powers Collection in more depth and detail than you ever thought possible!

What a collection of super-talent! Special thanks to shag of Firestorm Fan and Once Upon A Geek for putting this crossover together!

Blogs Will Live! Blogs Will Die! Crisis on Earth-Blog!
Posted by Luke at 3:00 AM

Luke - Great coverage! I never thought about the Charity Ball as being the quintessential Old School set-up, but you are totally right!

Love your blog (but you already knew that). Keep up the great work!

Nice to meet you.

I was going to paste the link without permission because I had very felt the interest for your blog.

Please link me with the blog if it is good.