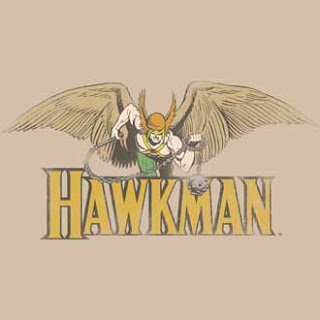 No sooner does Graphitti offer a Hawkman logo t-shirt in Previews then I come across a second piece of apparel.  This shirt, part of the DC Originals collection from Pop Funk, offers a nice nuetral color as a background for the classic Hawkman logo as well as the Winged Wonder himself.  The sand color I think is a good fit for the character, and even the slight distress fits a hero who has been around as long as Hawkman has -- both in the real world as well as in the DC Universe.

Pop Funk has lots of other great shirts for you DC fans, including such rarely seen (on t-shirts, anyway) characters as Green Arrow, Red Tornado, and the Martian Manhunter.  Pretty cool stuff!

I avoid buying t-shirts these days, as I claim vainly to be a grown man, but if thing actually showed up at a store for the right price, it would be mine!

Say, I've been scanning a bunch of my old Overpower cards for the Idol-Head and ...nurgh..., and it occurs to me I've got all of Hawkman's (including the rare "Justice League of America" Any Character Special.) Do you have access to these, or would you like me to shoot you some scans? Seven Hells, I'd even stuff most of them in an envelope for you, if you'd like. Outside of my set, they're clutter, and I can spare the $0.40.

The only Overpower stuff I have is a trio of first wave Marvel decks, so no, the Hawkman stuff is all new to me. I'll send you an email this weekend and we'll figure something out, as I still have the Martian Manhunter miniseries to send your way as well.

I've spoken to a rep for Pop Funk, and apparently they are trying to get more style guide art from DC for more characters, including The Atom. I hear you about t-shirts but hey, that's what the weekend is for right?

I've seen these DC shirts and have been tempted to buy one, but why on earth do they make them "distressed" (faded)?? I just don't get it. They would look much better printed in just normal colors.