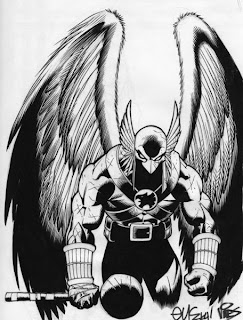 This piece is done by Ed McGuiness with inks by Dexter Vines, and was stumbled upon by your struly at the Comic Geek Speak Sketch Gallery. (Note: I want to stress that I do not have possession or any ownership of this image, and am merely reposting it from another site!)  The hulking, dangerous looking Hawkman is certainly along the lines of what we have come to expect from the character following the revamp/resurrection in the pages of JSA.  I am not sure what to think about the club (because, let's face it, that's not a mace), but I really like the look of the helmet, and the completely hidden face beneath it.

I'm considering making this a regular feature here on the blog.  Would anyone out there be interested in seeing more sketches of the Winged Wonder?

Let me tell you-- sketches rule. There's a virtually inexhaustible supply on the internet. Fans need help finding them without sifting through duplicates and other junk. Sketches are great for generating comments, as they inspire critiques and discussion on the nature of the character. They require very little work, and have saved my butt repeatedly.

As for the sketch in question, I'm filled with meh. It's not bad, but it doesn't feel like Hawkman to me. Ed's take was better in Superman/Batman, but I'm much more a Kubert man than an Anderson one when it comes to the Thanagarian.

I agree with you regarding Kubert vs Anderson. I'm in the point of the Silver Age stories where Murphy Anderson is the "man" on the strip, and I can appreciate his Hawkman's strength and power. But Kubert's work really speaks to the combined agility and strength of a raptor, for both Hawkman and Hawkgirl.

Given that the physicality of the character has become a major emphasis in the last decade or so (I always think back to the second arc of Volume 4 when Green Arrow calls Hawkman a "brute"), this type of depiction seems in line with what DC is looking for with the character. At least, until Starlin gets done... ?

Just to be clear, I'm a Lou Fine kinda guy, so in most cases I prefer that delicate Murphy Anderson line. Jim Starlin's an acolyte, and one of my all-time favorites. It's just that I don't find it works all that well on Hawkman. They're also both of the Alex Raymond school, where Kubert by force of visual alone helps separate Hawkman from his origins as a swiped concept.

When Geoff Johns was reworking the character, he kept going back to a description as "Conan with wings." Not only do I feel that does a disservice to the character's intelligence, but it could just as easily apply to Prince Vultan. I recently read a wonderful character bit in Justice League of America #96 where Hawkman defends a sacred Rannian city from a giant mechanical bug. "For this winged one knows deeply the past of many worlds, rooting himself in their treasures-- richness which he will ferociously fight to preserve..." To me, Hawkman should be one part Indiana Jones, having fantastic adventures while still coming from an academic place, deeply connected to a past he seeks to preserve and share. Sure, sometimes what he shares is the business end of a mace, but still, he should be far more than Wolverine on Red Bull.

Given the current persona of Hawkman, this sketch is freakin' awesome! I love it!