Batman: The Brave And The Bold S.1:Ep.2: "Terror On Dinosaur Island" 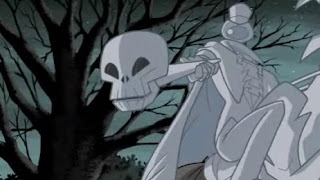 Those who have been watching the altogether awesome Batman: The Brave And The Bold cartoon were in for a treat this past Friday, as who should pop up in the opening segment but the one and only Jim Craddock himself, the Gentleman Ghost!

Even more fun was how Batman (with an assist from fellow Justice Leaguer Fire!) managed to subdue the spectral crook: Nth Metal Knuckles to the face, followed by Nth Metal Handcuffs!  Oh, why must you tease me so?  I am really enjoying this show and really hope that Hawkman shows up soon, either on his own, with Hawkgirl, or with the Justice Society.

If you haven't been watching this show, you owe it to yourself to check it out.  A ton of fun in true "All Ages" fashion, this is like a Silver Age comic book come to life.
Posted by Luke at 3:58 PM

Well, I'll give this to you, this show does have quite a lot in common with SA comics. However...not all of it is good. In fact, much of it is not so great. Like SA comics the show is very imaginative, visually interesting, and pretty fun if you can turn of your brain for awhile. On the other hand, just like SA comics, it has REALLY uneven writing and is very shallow. That being said, it isn't terrible. I'm really looking forward to the Aquaman episode, and hoping that it will get better as the crew has practice with their format.

Here's hoping that we'll see a decent Hawkman guest star at some point in time...at least one that isn't riddled with plot holes and bad writing like The Batman's.

So far I haven't found the show to be uneven. The tone is consistant and the through-line of each episode has stayed true. As for the shallowness, well, yes, but I think that is part of the point, isn't it?

I don't know, I just REALLY wanted to like this show, but I have found something lacking. Something to which I can't seem to put satisfactory voice. Even my wife, who is by no means a comic fan, didn't have the problems I had with it. She found it harmless, if not overly appealing, and somewhat entertaining. While I didn't hate it...there is a lingering "something" that irks me about it. Yes, I do, as I have certainly (over)stated, reject the idea that a series NEEDS to be shallow or light hearted to bring in a wider or younger audience. I strenuously insist that there is no reason all of our superhero fare should not be of the same quality (if not the same mold) as the Timmverse. Still...I found myself...almost bored with this show, and bridling under the broader strokes of its narrative brush (four antique avians lifting a cruiseship?). I wanted more from the action, more from the story, and more from the characters and the actors who voiced them. Perhaps that is the crux of it.

I think this show is a lot of fun and I'm really enjoying. Gentleman Ghost's appearance was a hoot and, yes, the use of the Nth metal knuckles was positively brilliant! Here's hoping there's a proper Hawkman team-up on the series sometime soon!