Crisis On Earth Blog: COIE Slipcase by Perez and Ross

One of the great shames of my life as a comic book fanboy is that I have never read Crisis on Infinite Earths. In fact, I can't say as I have ever read a Crisis on Any Earth! Growing up, I was always a Marvel fan. I knew more about COIE from Wizard than I ever did from actual DC comics! Only years later did I get my "mad on" for the DCU, and really start learning about the Crisis, but to this day I have never read the actual series.

Not exactly the best way to endear me to anyone reading this post, I know, but I figure honesty is the best policy in this age of full disclosure.

Anyways, despite the fact that I have never read the series, I have been in love with this George Perez-pencilled, Alex Ross-painted wraparound cover since the first moment I laid eyes on it. I mean, just, wow! That's really just an intense looking cover! 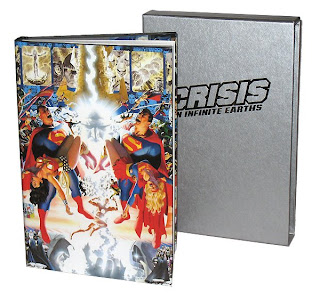 The full image is even crazier. With a mind-boggling 562 characters featured, it has got to be one of the largest collections of super-folk ever.

Unsurprisingly, given their longevity in the DC Pantheon, the various Hawk-characters appear in the series, and thus, appear in this piece.

Up first is Earth-1 or Silver Age Hawkman, Katar Hol. Found on the exteme left-hand side of the image, in front of who I assume is Chemo, Katar looks appropriately awed by the situation. I am not sure why he has who I am guessing is Zatanna flying through his wing, but I really like the bright, clean look he has here. 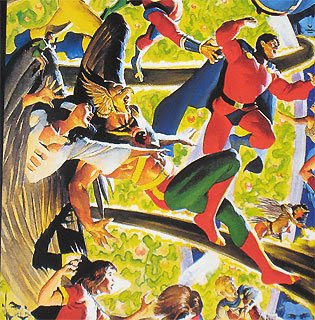 Earth-1 Hawkgirl (or Hawkwoman as she was called by this point) Chayera Hol is next, found in the middle third of the image, right under Phantom Lady's boot. She's flying right at the reader, so we don't see much of her, but what we do is really sweet: her beautiful wings and downright awesome helmet! 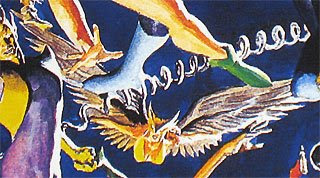 Next is Earth-2 or Golden Age Hawkman, the blonde bombshell known exclusively as Carter Hall. Almost directly above Hawkwoman and right behind Starfire, Carter is depicted in his "lucha libre" style masked look. I imagine that this was done to help differentiate between the two versions, as otherwise they'd be identical! Once more the bright colors really pop in this format. 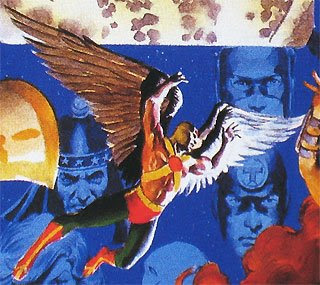 Last but certainly not least is the Earth-2 Hawkgirl, Shiera Sanders. Found immediately next to Supergirl's right hand, Shiera is in a pretty prime piece of real estate. She looks very graceful in flight here, and I like seeing her red-and-green costume used. 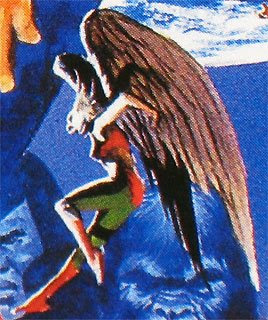 You can find a guide-map of all the characters over at the Annotated Crisis on Infinite Earths web site.

Like any good crossover, this would not be complete without a few others getting in on the action as well! So in the same spirit of bringing different characters together to fight a threat, we're bringing different bloggers together to post about this sweet piece of art! Check out these other character-driven comic book blogs to get the low-down on some other fan favorites.

I am the Phantom Stranger

Mail it to Team-up

Blogs will live! Blogs will die! Who will survive the... Crisis on Earth Blog?!

Special thanks to Shag, who provided me with all of the COIE imagery, and to rob! for the awesome logo!
Posted by Luke at 7:15 AM

Curiously enough, that's not Zatanna but the Legionnaire Phantom Girl. I wonder if Phantom Lady's proximity appearance was intentional?

Luke - Great write-up! Your love for Hawkman and the Hawk-ladies inspires me! I'm a big fan of the Hawks and was pleased with their involvement in Crisis on Infinite Earths.

Keep up the great work!