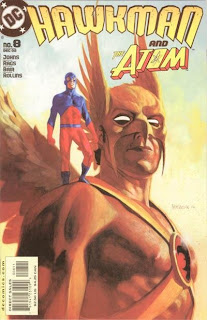 Summary: Carter Hall meets up with his professor friend Ray Palmer (AKA The Atom) at a fancy French restaurant to discuss Carter's recent return to the land of the living (along with why he has brown hair).  Meanwhile, Chief Nedal and Officer Isabella continue to look into the cold case of the murder of Hawkgirl's parents, finding a lead involving local baddie and counterfeiter Warwhip.  Hawkgirl rushes the villain at his apartment, who not only seems to be into using his whips in the bedroom but also can create whips of flesh from out of his arms.  As the pair struggles in the sky over St. Roch, Chief Nedal shoots Warwhip dead.  Kendra, upset over another lead being dashed, returns home and can't sleep, feeling alone and pushed away by Carter.

Ray tells Carter that he wants to study the Nth metal (to which Carter agrees), and advises his friend that love is a complex and powerful emotion, stating that he got married because "it was the smart choice" and not necessarily the right choice, and so Carter must be careful with how he treats Kendra and what he expects out of her.  Carter flatly states that they are partners and nothing more.  Bidding his friend adieu via long distance telephone line (paying for dinner as well, since he knows Ray still makes a teacher's salary), Carter returns to his bunk at Stonechat Musuem, only to have his rest interrupted by the sudden appearance of his son, Dr. Fate.

Review: Let me just say that while the dislike between Hawkman and Green Arrow may be a bit much in this series, the friendship between Atom and Hawkman is pitch-perfect.  The notion of Hawkman and the Atom being friends taps into a lot of themes which work well (not the least of which is the big burly athlete who is friends with the weak nerdy guy), and its nice to see them played out here, even if Ray Plamer would go off the deep end a short time later.  I like Carter's personality here, as well.  After pushing too hard to win Kendra's affections, he is now stubbornly resigned to the "just partners and nothing more" attitude.  There are readers who don't like the hardheaded Hawkman but I like him, since it does help to differentiate him a bit from his contemporaries as well as help me identify with him.  The subplot about Kendra's parents builds as well, with the bizarre Warwhip making for easy Hawk-fodder like Bloque was earlier.  St. Roch is not exactly Central City when it comes to local baddies, is it?  And Rags Morales' pencils remain consistantly excellent.  There is not much action this issue, just a short fight with Warwhip, but even the quieter moments are handled really well.  Despite the cliffhanger spoiling the "done in one" aspect, this is a very cool comic which fans of both the Winged Wonders and the Tiny Titan would enjoy reading.

Hmm...this sounds like an interesting story, and I've also always been a fan of the friendship between Carter and Ray. It makes a weird kind of sense that I can't quite put into words, even when they are both portrayed differently than they are in this incarnation (a rather loaded word when dealing with Hawkman). While I appreciate the hard-headed side of Carter, I also appreciate the clever, thoughtful Silver Age version. He was still a two-fisted hero, and still a man of indomitable will, but he was a bit more...well, I suppose you could say 'approachable.'

Poor Ray, though, a character tortured by writers for years. Hawkman has had his ups and downs, but he doesn't come close to the tragedy that is the Atom, in both a narrative and editorial sense. Still, I suppose there aren't many characters who HAVEN'T received such treatment, my much beloved Sea King first among them. The mess that is Carter's history would be a pretty good example of this, I suppose.