The Long-Lived Look Of Hawkman 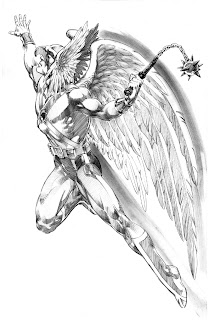 The main appealing feature of Hawkman is, to me, his appearance.  Moreso than any element of his personality, history, or back catalog, the look of the character is the most easily identifiable aspect of what has made Hawkman viable for 70 years.

Hawkman stands among fairly rarified company when it comes to his look -- that is, how his look pretty much resisted change.  Of the DC Golden Age characters who were revived in the Silver Age, very few retained their classic apperance: Aquaman changed his gloves, Green Arrow and Black Canary stayed pretty much the same, and the the Hawks.  In fact, one might even argue that Hawkman (and Hawkgirl) stands nearly alone in this aspect, since, like Superman, Batman, and Wonder Woman, Aquaman and Green Arrow had been published continually since the 40s, while Hawkman disappeared with the end of the Justice Society's run in All-Star Comics in 1951.  So Hawkman, Hawkgirl, and Black Canary alone went idle and then came back with the same look as they had in the "old days."

And why shouldn't Hawkman have retained his classic look?  His is amongst the most striking heroic character designs of any era.  The barechested warrior, with a fearsome helmet, a large weapon, and broad, raptor-like wings is a distinctly unmodern style, instead tying itself to classic fantasy elements, giving Hawkman a timeless quality.  Appropriate, considering that the Golden Age Hawkman is a "timeless" character, dealing with reincarnation and ancient civilizations.  And, at the same time, the science-fiction setting of the Silver Age Hawkman does not negate this historical aspect -- tales ranging from John Carter to Buck Rogers and beyond utilize fantastical styles in a science-fiction setting, and the Silver Age Thanagarian Hawks fall into this category as well.

In the 80s, when Tim Truman redesigned Hawkman for the Hawkworld miniseries (and later, ongoing), he moved more into a "hard" sci-fi design, with the black body suit and space-age weaponry.  But even in this iteration one can make the fantasy connection, simply filtered through a modernist sci-fi approach.  And even with the sci-fi elements, the same basic appearance remained unchanged, with the wings and menacing helmet in place.  Clearly this look has it's fans; after all, that's what first attracted me to the character.

It's appropriate for a character like Hawkman, who has had two wildly different approaches during his existance, to have had such a consistant look over the same period.  Comics are a visual medium, and having a striking look is just as important as a compelling story when trying to make a hero popular.  The looming figure of a warrior, looking like he stepped out of a time warp, armed with ancient weapons, his face covered with the helm of a bird of prey, and sporting a set of wings from his back will simply never go out of style, and remains a key element of Hawkman's long-lasting appeal.

I have a completely different perspective. Hawkman was among the first and most routine costume tweakers in comics. He's had at least six masks, 2-3 before his Silver Age revamp. Never mind all those Zero Hour variations! There are constants, but I'm just reminded of Jules Feiffer's assertions-- that this was likely due to everyone swiping from the same Alex Raymond panels back in the day!

The costume was tweaked, yeah. That's a good point I pretty much glossed over. My main point is that the basic concept of Hawkman's look, not being particularly tied to any one period, never really looks dated. A lot of his Golden Age contemporaries don't have the same luxury, which is why the Silver Age versions were streamlined and changed.