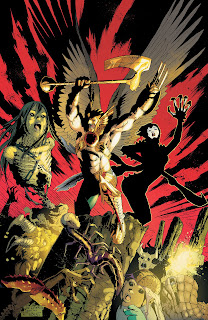 Had a chance to read the new issue last week, and wanted to mull over it for a few days before posting.

This issue, once again, feels like a throwback to the late 1980s or early 1990s.  The dialogue, the thought balloons, the plot, all of it feels like a relic from that era.

I am unsure how to feel about this.  In one sense, I started reading comics in the early 90s, and have a lot of love for that "Post Crisis" period in both the DC and Marvel universes.  So a book which espouses that sort of straight forward mix of action and character hits the mark for me in a way that a lot of what I call Modernist comic books simply don't.  It's that "Golden Age Period" theory, where your personal Golden Age of Comics is when you were 12.

But all that said, should a comic book published in 2013 really sound like it was written in 1990?  I mean, should it really?

And does that even matter?

I liked the comic, actually. Our new Shadow-Thief is a big change from Carl Sands, and her stance as a sort of gun for hire is a nice touch.  The next (and final) storyline is set up in the subplots, and we do get some nice action with Hawkman and Thief against the beasts of the other dimension.

But there is some oddities. For instance: After Hawkman calls her Shadow-Thief, why does our new Thief never correct him or demand to be called something else?  Isn't it convenient where Prof. Ziegler is taken for treatment just happens to have a deep dark secret?  Are we really introducing a bad guy named Dr. Payne? And why is everyone SO ANGRY?!

Also, DeFalco gives us a new wrinkle in Katar's backstory -- battling in gladiatorial pits before being noticed by the King and brought to live in castle, where he was exposed to the cruelty of the ruling class, and presumable became the "brother" of Corsar and the consort of Shayera.  (How very Robert E. Howard.)  This continues the new twist on this which DeFalco introduced in the previous issue, and frankly, I like it a lot more than the almost pacifistic Katar we saw from Liefeld.  It also fits much better with how he is being portrayed in Justice League of America -- which is to say, a brute -- and jives with the "Savage" part of the title.

The art is switched up a little bit this time.  The scenes which take place in the "real world" are by the usual team of Bennett and Thibert, but those in the Shadow Realm are done by Fabrizio Fiorentino, nicely differentiating between the two areas.

I can't say I am surprised that the book is ending in a couple of issues.  But for whatever the opinion of one blogger is worth, I'm still having fun.

I enjoyed the issue. I didn't think of it while reading, that stylistically it was a throwback to the 90s—and for that matter, I didn't LIKE a lot of what went on in the 90s in comics—but I liked it. The mix of action and character-building through quips and actions (rather than by personal revelations or soul-searching monologues) is what I live for (read for) in comics. I despise Postmodernism and character-as-plot; give me (especially in my comics!) the form and structure of a good action movie any day!—and this was pretty much just that.

I physically felt a piece of the puzzle of Katar's backstory slide into place when he spoke about being sent to the gladiatorial games. I really hope this is kept in his history, because it gives him a great deal more texture, and substance, and goes a long way toward explaining his motivations and attitude.

Love this new Shadow Thief! She's much better than the dismal Carl Sands. I'd be pleased if this version is the one that's used in the future.

I'm—pfffaaaaahhh! (that's the sound of my balloon deflating—very disappointed the title will end; especially seeing how the new team on Green Arrow, another of my favorites, has 'way upped the quality of that book, I can't help but think, "If only...."

What if Jeff LeMire and Andrea Sorrentino did Hawkman? Or somebody else? In just the few panels he's been in in JLA, Geoff Johns has really given Hawkman a scary, imposing presence. This proves that Hawkman as a character isn't at fault; he just needs a writer who understands how to make him work. Is Johns the ONLY one who can do that? I wonder.