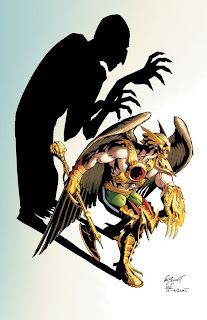 I like Shadow Thief, as well. I wonder how they'll play him this time around. Last time, as I recall, the shadow tech drove him mad. I rather liked that aspect—that using it came with a price.

My gut tells me I'm *not* so crazy about Hawkman on a search for hidden Thanagarian weapons, mostly because it basically sounds like such a standard plot: "collect the mystic artifacts." But it could work out; it's all in the execution (or the reflexes, as my old pal, Jack Burton, likes to say).

On JLA: I enjoyed Carter/Katar's appearance in Green Arrow, and was especially pleased, both to see that Ann Nocenti didn't write them as conflicting personalities right from the start, and—more surprising—that at least in the present situation, Ollie was portrayed as the cooler head, and the more experienced at superheroing.

It's immense fun to see Oliver and Carter arguing the Liberal-Conservative viewpoints, but I wouldn't want that to be the one-trick-pony of their relationship, either. Kirk/Spock, Finch/Mr Reese of Person of Interest, Rizzoli & Isles, Holmes & Watson—there are lots of mismatched yet well-matched, complexly-related teams. I'd best like seeing Oliver and Carter go that way than that their dynamic remain simply political.