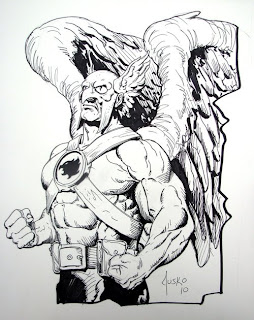 I first became aware of Joe Jusko back in the 90s with the Marvel Masterpiece trading card sets. For those who don't know, they were a set of fully-painted cards and was Marvel's first "prestige" card set. So whenever I hear Jusko I think of Marvel Masterpiece. But here we have a rather striking Convention Sketch of the Winged Wonder!

Man, can you imagine Jusko on a Hawkman series? Would be something to see!

Jusko is a perfect artist to work on Hawkman. I just wish there was some Hawkgirl action out there, too!