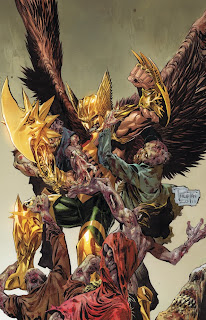 Thanks to The Source, we now have solicits for issue #5 of The Savage Hawkman!

THE SAVAGE HAWKMAN #5
Written by TONY S. DANIEL and JIM BONNY
Art and cover by PHILIP TAN
On sale JANUARY 25 • 32 pg, FC, $2.99 US • RATED T
The appearance of an otherworldly visitor to the city sets in motion a series of horrifying visions of the dead walking the streets of New York City. But only Carter can see them, causing him to question his own sanity. Can Hawkman unravel the mystery before it consumes him?

Hawkman fighting the living dead?  How trendy!  If I can speculate, it seems as if the Morphicius storyline will wrap up in #4, opening the door for this story.  Although from the solicit, I suppose that this could be tied to that storyline as well.

I really dig Tan's cover, with Hawkman battling a group of zombies.  I think the Winged Wonder is about to open a can of whoopin'!

I don't care for zombies, as I know I say repetitiously around the net. I consider them inferior opponents for Hawkman. But I have to admit that it's a nice cover.

Anyway, zombies *are* a supernatural menace, and both because of his traditional association with Egypt, and all *that* implied myth and mysticism, and because of what I perceive as a nice pulpishness about him, I think he should have more supernatural foes and connections.

To wit, I really enjoyed the first issue of the new Shade series, and it got me thinking that it would be nice to see Hawkman in Opal City sometime. The Shade, gentleman rogue, is rather a nice counterpart to the Gentleman Ghost; and Starman, whatever version (like Hawkman) shares Golden Age roots and associations. It all fits together, to me. Maybe DC wouldn't want Carter to relocate there, but it would be really interesting to see him interacting with those characters, in that setting, don't you think?

It might be cliche to say it, but I liked zombies long before they were popular. I dug them because of Night of the Living Dead, Dawn of the Dead, and Zombie long before the general public had any thoughts about zombiedom in general. So from that standpoint I have no problem with them; rather, I find their popularity very amusing.

I don't mind Hawkman battling zombies because, as you say, they are typically a supernatural foe, and it gives him plenty of fodder to wade through. Also, there is the promise of having to fight a head zombie or necromancer-type character at the end as well.

I read Shade #1 and thought it was pretty neat. I think that unfortunately DC has gotten away from the idea of Hawkman as a thoughtful hero, instead forging him into the man of action mold pretty firmly. I have grown to enjoy Shade and the Mikal Starman, and at some point I guess I need to read Starman.

In the meantime I would love to see Hawkman take a turn in Opal City, even if he didn't particularly like The Shade. If nothing else they could exchange stories about "hallowed antiquity." :)