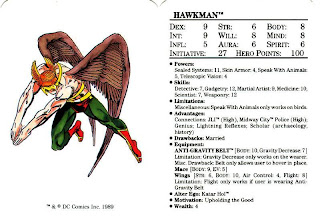 It's the most wonderful time of the year... that's right: Mayfairstivus!

Uh, what?  Yeah, you can point the blame for this directly at Diabolu Frank, he if the Idol-Head of Diabolu, Justice League Detroit, and lots of other quality comic book blogs.

Anyway, I'm the odd man out in this celebration because not only have I never played the Mayfair DC Comics RPG, up until recently I didn't know such a thing existed.  I was a Marvel guy for a long time, and I didn't start reading comics "for reals" until like 1991, so I was on the wrong side of the timeline for this game and its various editions and releases.  Hell, factor in the fact that I didn't get interested in RPGs until I was in high school, and didn't play my first real game until I was a frosh in college, and the only superhero game I have ever played was a one-off session of Mutants and Masterminds, and it all starts becoming clear.  Head over to Shag's run down of the system for more background.

Nonetheless, I can still show off these scans which Frank was kind enough to supply me with!

Katar looks sort of like he just spotted a new Sundollars Coffee on the streets of Midway, but I like the nicely defined musculature he is sporting here.  The states don't mean much to me, but judging from Frank's post about the Bronze Tiger, it looks like Katar is either near or slightly above peak human on most of them, which makes sense.  Thanagarians have great technology and Hawkman is a very skilled combatant, but he's not mixing it up with the powerhouses.  I like the ranks in Detective, a definite nod to his Silver Age representation.  Same with Scientist, a connection to the Thanagarian science the Hawks would use back in the day.  It looks like Hawkman would fit in an adventure where he normally fits in with the League -- using his fighting skill and technological advantage to take down his foes rather than super powers.

Although, I must say I think Katar (and Shayera) would find listing "Married" as a Disadvantage quite inaccurate!

Let me give a final shout-out to one Mr, Tom Hartley, the inspiration for all of this nuttiness.  And be sure to check out these other fine Mayfairstivus participants!

Most of these cards are obviously done by amateur/unpolished non-comic artists, but this was one of the nicest and most professional pieces looking of the set.

Hawkman really lucked out by getting this card right before Hawkworld screwed everything up. "Married" is a way more manageable disadvantage than "ex-junkie murderer."

Part of the fun of Mayfairstivus is you have guys like Shag and Anj getting really into the history and gaming mechanics, guys like me narrowing on character stats, and guys like you and Liss who come from the outside perspective and offer entirely different angles on the whole shebang. I enjoyed your post, and the best thing about a ten day crossover is that there's no time pressure. Just getting published means you're right on schedule, because here's someone coming in as another finishes up/takes a break.

I hadn't heard about the game until now, either, so don't feel bad.

Marriage being listed as a drawback made me laugh out loud.

It's nice to see they kept the "speak with animals" power, though.

Dang! I haven't changed my blog's background in a while, and need to save the HTML into another text doc just in case. I'm not skilled enough to rebuilt it on my own, and Google no longer offers Son of Mogo or whatever as a default. Sorry, dude!

@Frank: Re: The State Of the blog, at least I was able to get the side bar back in place. There was a loose, unclosed HTML tag in this post which was screwing everything up.

Re: The game, it seems like it would have been a fun little system. I am not hardcore enough to debate the merits or drawbacks of different systems in much detail, but from reading the different character cards I have seen posted it seems like most of them are pretty straightforward, which is good for a superhero game.

@Liss: I just have a thought of Shayera threatening the writer with her mace. "Tell me again why this is a 'disadvantage'?"

Well, actually I think you only get half credit if your spouce is also a super hero.

The idea is (especially if you have a public identity) that if you have a normal spouce they can be kidnapped by bad guys or whatnot.

I think there's also a modifier if you have a secret identity (don't recall). :)