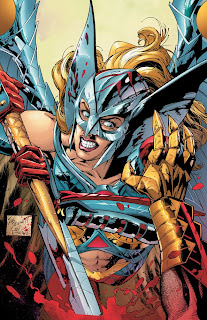 DC has released previews of their October solicitations for the Justice League family of books, and, as luck would have it, that is where the two Hawk-related series are currently grouped.  Thanks to Newsarama for the previews, and away we go!

THE SAVAGE HAWKMAN #13
Plotted by ROB LIEFELD
Scripted by ROB LIEFELD and MARK POULTON
Art and cover by JOE BENNETT and ART THIBERT
On sale OCTOBER 24 • 32 pg, FC, $2.99 US • RATED T
• "HAWKMAN: WANTED" begins here!
• The secrets of Hawkman's past are coming to claim him in an adventure that will span the entire DC Universe before its shocking conclusion!
• Continues next month in both THE SAVAGE HAWKMAN and GREEN ARROW!

"Princess Shayera" makes her cover debut here, and she looks every bit as Savage as our hero.  And this adventure will "span the entire DC Universe?"  Sounds suitably epic; not sure the last time that Hawkman had an adventure that broad.   The tie-in with Green Arrow is not surprising, really.  In fact I am a little surprised that it took into the second year of the New 52 to give us a meeting between Carter and Ollie.

GREEN ARROW #13
Written by ANN NOCENTI
Art by FREDDIE E. WILLIAMS II and ROB HUNTER
Cover by AARON LOPRESTI
On sale OCTOBER 3 • 32 pg, FC, $2.99 US • RATED T
• Green Arrow in China battling zombie warriors!
• Side by side with the Chinese kung fu genius extraordinaire, Suzie Ming!
• Ollie comes home to find trouble in the sky over Seattle – trouble that will lead to the "HAWKMAN: WANTED" storyline starting next month in GREEN ARROW and THE SAVAGE HAWKMAN!

I have not read any of the New 52 Green Arrow, though my GA loving friend Adama didn't give it good marks when I discussed it with him.  That having been said I have heard pretty good stuff about Ann Nocenti's writing since she has taken over the reins of the title.  I might pick up this issue as a prologue to the crossover.

EARTH 2 #5
Written by JAMES ROBINSON
Art by NICOLA SCOTT and TREVOR SCOTT
Cover by IVAN REIS and JOE PRADO
1:25 B&W Variant cover by IVAN REIS
On sale OCTOBER 3 • 32 pg, FC, $2.99 US • RATED T
• It's the final showdown with GRUNDY!
• The Green Lantern, Hawkgirl and The Flash take on Grundy and the military's hero, The Atom!
• The Green Lantern makes a choice that will change the course of Earth 2 forever!

I'm a little behind the curve here because I have not read #3 yet (it's in my DCBS box waiting to be shipped), but it sounds like this title is moving pretty fast out of the gates.  The team of Hawkgirl, Green Lantner, and Flash sounds impressive to me.

Looks like big things are afoot (awing?) for the Hawks in the coming months in the DCU!
Posted by Luke at 10:54 AM

Just picked up Green Arrow(s) #s 6, 10, and 11 at my LCS this weekend, and I was very pleasantly surprised. I suspect that, as with Wonder Woman, much of the ire directed at this revamp is from traditionalists who want Oliver to be just as he ever was, or at least as he was in whatever era that they imprinted on him. Me, I liked old-OLD Oliver & Speedy—before beards, drug addiction & social activism, and I'm fine with this new version. I see him as brash but competent, with plenty of room to grow. I'll be buying it regularly, at least for a while, to see if this new infatuation sticks.

As for Savage Hawkman and the larger picture, I'm eagerly awaiting Princess Shayera. A Green Arrow tie-in is very welcome. And a company-wide, Hawkman-driven story sounds wonderful. A meeting with The Atom Ray Palmer wasn't mentioned, but let's hope that's in the offing, too.

The hot-headed hero who would always speak his mind.

See the version of Green Arrow I am most familiar with is the one from Smallville -- so "brash but competent" fits the motif for me.

I'm definitely going to pick up #12 to get some background on "Hawkman: Wanted," but whether the books ends up in the regular pull list is a factor of how good it is versus the cost, unfortunately!

I noticed that Shayera on #13, appears to be Blonde, whereas back in issue #9 she was the traditional Red Head! Something to consider!