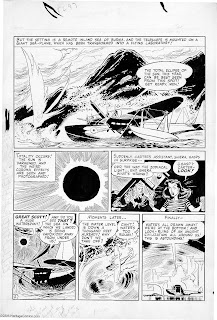 Well readers, you're in store for a real treat today, Doug Zawisza , Honor Wings bearer, proprietor of the Doom Patrol blog (hey, the Showcase is out next week!), and author of the very cool Hawkman Companion from TwoMorrows Publishing has provided me with a very cool set of images: original art by the legend Joe Kubert from Flash Comics #97! Even more amazing is that these pages have never published in sequence... I'll let Doug explain it:

Hey Luke!
Sorry for the hideous delay between first reaching out to you about Companion stuff and now. ...

To make up for it, here's five NEVER-BEFORE-published-in-sequence pages from Flash Comics #97. I originally had all five pages in the Companion, but DC told TwoMorrows "Pages 30 - 31, a previously
unpublished 5-page sequence of a Hawkman story. While I understand that some of these pages were earlier published in TwoMorrows' *All-Star Companion Vol. *3 and “Alter Ego” magazine, they have never been published in a complete sequence, which is something we have a problem with. One to two pages is typically OK, but not 5 in sequence."...

They were originally on a nice two-page spread, but the book got changed - dramatically - after a review with DC Comics. If you want to post the pages, here they are.

Very interesting stuff! I will work from the position that in an effort to not step on any toes, I too will not be posting the images in one sequence -- instead, I will spread them out over the next few weeks to give some "buffer" between them. I don't know if posting them online on the same site constitutes posting them in a sequence, but we shall see, I suppose!

Note: I have changed the filenames around a little bit to make them easier to keep track of, but let me be clear that credit for these goes entirely to Mr. Zawisza who graciously has offered them up for my use here! Thanks a million, Doug!

No problemo!
Since I couldn't use them, they needed to be shared somewhere.
What better place than here?