Hawkman v.3:no.21 May Be The Worst Hawkman Story Ever Written 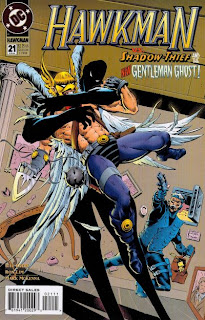 You know, there's been a lot (and I mean a LOT) of negative reviews on the Internet for the entire run of Savage Hawkman. I personally don't understand the animosity amongst the netmarks, nor where the "let's get this book cancelled!" campaigns have their origins.  And I'll also admit that there have been some less than stellar issues of the series.  But this, my friends, takes the proverbial cake.

I'm not sure how else to put it, but, man, Hawkman v.3:no.21 is without a doubt the single worst issue of Hawkman I have read across any iteration in any era.  The story involves Hawkman attending a giant Conservative bash in Chicago (why would Conservatives ever party in CHICAGO?!) only to find the entire place to be crawling with scum and villainy.  Oh boy, where to start with this mess?

The story is a train wreck.  Never mind the grasping, heavy-handed, groan-inducing politics of Bill Loebs (any time a Liberal tries to write a Conservative, it comes off childish and immature... much like a Liberal), but even beyond that the story makes no real sense.  We are introduced to a "new" Gentleman Ghost... who happens to be named "Gentleman" Jim Craddock.  Only he's not a ghost, he's a high society jewel thief who makes the same joke about his thieving habits being rumor and allegation literally in every scene he appears in.  EVERY SCENE.  Wow.  This version of the Ghost was so popular that he appeared exactly one more time, in Underworld Unleashed #1 of all places, before being thankfully consigned to the fading memories of those unfortunate enough to read this comic.  To say that Loebs misses the point of the Gentleman Ghost would be a disservice to other writers who have missed points over the years.

The Shadow-Thief does not fare much better.  Bemoaning the guests at the party, Sands mutters "This country gets whatever it deserves."  Really?  Carl Sands is suddenly a bleeding heart who cares one way or the other about the elected officials of the country?  Carl Sands, serial burglar who is obsessed with power cares about who won the midterm elections?  The stupidity continues when Hawkman stops him by touching part of his shadow-costume and then claiming that the suit was obviously built with a failsafe... that he simply did not use until this very moment, which is lucky, since the issue was almost out of pages.  Urrgh.

I won't get into Katar spouting false statistics straight from Mother Jones (if this issue was written today you could change this reference to "the Huffington Post," and it still works), nor the fact that Helene Aster is involved with this story, despite being a reincarnation of the ancient Egyptian Hath-Set, and our hero being from Thanagar.

The art is from the normally reliable Ron Lim, but this was clearly a phoned-in paycheck for him.  I can think of no other rationale for Katar's horrid party attire, or why the Shadow-Thief is suddenly an elf.  He does pull a nice trick -- the design of this, ahem, "new" Gentleman Ghost is about as boring as the character himself, so that is something.

The rushed aspect continues if you examine a few details.  The cover date is June 1995, which means this hit the stands in March, a few months after the 1994 midterms.  At the time of the midterms, the book was hip deep in the "Eyes Of The Hawk" storyline, in which Loebs was setting up his new status quo for Hawkman.  So, it seems to me that he wrote this drivel after the elections, had Lim handle the art because Steve Lieber was still doing the regular book, and then released it when they had a chance.  Apparently the Contract With America was an excuse to write really piss poor comics.

I sure hope that "Way Of The Warrior" is better than this, because I cannot imagine it being any worse.

I smell bias in this review!

I haven't read that issue since it came out, and obviously the most memorable thing about it was Marvel star Ron Lim drawing odd looking DC characters before taking over Sovereign 7. The Gentleman Ghost revision was also admittedly lame. I think I was watching the Rush Limbaugh TV show by this point, and leaned right, but wasn't particularly offended by anything here. It was just meh, not unlike Loebs' entire ill-fitting run. At a time when Hawkman really needed to kick ass, he just kept getting into slap fights.

Even dismissing the political aspects, the entire issue is nonsensical. At least Loebs was a True Believer in his Avatar stuff; this is just half baked leftovers. :)