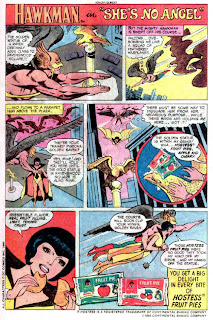 Inspired by a recent episode of The Fire And Water Podcast, please allow me to present a classic Hostess advertisement featuring Hawkman!

While on patrol, the Winged Wonder is waylaid by a pair of trained falcons, who plan to keep Hawkman busy while their mistress, Golden Raven, steals a golden bird statue.  But Hawkman's quick use of some Hostess Fruit Pies distracts the dastardly femme fatale from her criminal enterprise, allowing Hawkman to take her into custody.

The only thing which would have improved this ad is if Hawkman had used the Cupcakes instead of the Fruit Pies, because we all know that all women are crazy for chocolate, right?  *ducks to avoid thrown objects!*

Seriously though, this one is really a lot of fun, as Hawkman gets a Hostess Supervillain of his very own to fight.  Golden Raven has a pretty good look, with her cloak and flared shoulderpads, plus the Jean Loring haircut.  (One imagines that he has at least one pillbox hat in her closet.)  I also like the little touch of Hawkman using his chain mace as handcuffs to keep her wrists bound, a nice touch.  Although, I have to wonder about Golden Raven's plan -- sending birds to harass the Silver Age Hawkman, who could talk to birds, seems like bad planning on her part.

I fully expect Geoff Johns to use Golden Raven in the pages of Justice League of America.

According to Rob Kelly (of The Aquaman Shrine!), a lot of the art on these was done by Curt Swan and Vince Coletta, which I am willing to accept.  Swan did not work on Hawkman much so he doesn't have a very clear "defined style" on the character like, say, Murphy Anderson did.

(You can see another Hawkman Hostess ad right here!)


Image: Hawkman Hostess ad, artist and date unknown, retrieved from ComicVine.
Posted by Luke at 8:43 AM