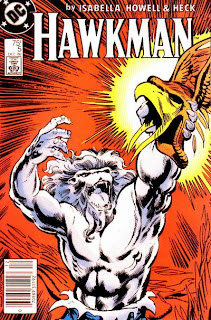 Summary: Down on his luck archeologist Ed Dawson is haunted in his dreams by the spirit of Lionmane, and envisions himself tearing Hawkman apart...

In the waking world, amid a rally in support of Hawkman and Hawkwoman, a meeting of the Midway City Museum board of directors is taking place, with Joe Tracy leading the opposition to the Halls and George Emmett marshalling the defense.  Also in attendance is Dawson, whom Carter has suggested be his replacement should he be asked to step down as curator.  The meeting is interrupted by Gerald Trent, newspaper tycoon and father of the murdered Mavis Trent.  He informs the board of his intentions to sue the museum for liability in the death of his daughter, unless the Halls resign.  The board calls for a vote and the non-members must leave, leading to a confrontation between Joe Tracy and Carter in the hallway, with Carter berating Joe for how he is ruining the memory of Mavis by drinking himself into a raging stupor.  The Hawks wing off to get some air, where they discuss leaving Midway City to more effectively battle the Thanagarian invasion.

Meanwhile, a Thanagarian plot is underway.  While the spy Coral ropes Dawson to the basement, three Thanagarian agents move on the board room.  In the basement, Coral shows Dawson a Mithra Meteorite, which will turn him into Lioname.  Dawson resists, but is forced to touch the meteorite by two Thanagarians, and transforms.  But, the beast is uncontrollable, and he rips apart the two alien toughs.  Upstairs, the other three agents force themselves into the board room to kidnap Emmett, but the old man puts up a fight, taking out two of them before he is subdued.

Lionmane rages upstairs right as the Hawks return.  Joe Tracy is freaking out because Coral was downstairs with the creature, and runs off to find her.  The Hawks fight Lionmane, but he gets stronger as they do, developing more of his powers until he is able to knock Shayera unconscious.  She wakes in a daze, but then finds Hawkman with a spear jammed into his chest!

Review: Wow!  After the silly fun of the previous issue, this one is back into the main story with gusto.  I really dig what Isabella is doing here with the main plot.  The idea of "superheroes creating an unsafe environment" is cliche now, but seeing it put to such effective use as far back as 1986 is indictative of where DC was in this Post-Crisis era.  The use of Gerald Trent is a nice touch as well, because we as readers can not only understand his position but sympathize with it as well (same as Carter does, for that matter).  Lionmane is a suitably savage villain and him being used as an unwitting -- and unwilling -- pawn of the Thanagarians is a nice mix of old and new.  I have maintained for a while that he would be a great modern foe for Hawkman and this story just reinforces that.  And you can't beat a good cliffhanger.

The art is something of a mixed bag, as has been the norm for this series.  Howell's pencils are concise and clean, but they are not really helped any by Don Heck's inking.  They are not hurt, either, as Heck's work brings a sort of 60's Marvel aesthetic to the artwork, especially in the board room sceces.  It's perfectly good art for the story though.  The cover has a sort of Barry Windsor-Smith feel to it, as if Lionmane was fighting Conan or something.  Another note about the cover: Lionmane is colored white, making him more like the Wendigo than anything else.

In the pro-Hawks protest outside the musuem, someone is holding a sign which says "Free The Kirby 8000!"  That's a stumper to me, anyone out there have any thoughts?

Hey man, based on your recommendation I picked up the whole run of this second Hawkman volume, and boy was it worth it! They were cheap, so I was able to get all 17 issues for a song, but I would have gladly paid twice the price for such great Hawk-adventures. I hope that you'll be doing some more reviews of these, as these books are by far my favorite Hawkman comics so far. The action is good, the writing is sharp, and I really love the portrayals of the Hawks and their supporting cast. I'm particularly fascinated by George Emmett. I hate that the series ended before his character got a bit more exploration. The team on this book did something pretty neat by taking him from just a James Gordon clone to an interesting and distinct character.

This issue in particular was pretty great, and that final panel with Hawkman....wow, pretty intense. Tony Isabella has certainly impressed me with his work on this book. It's a shame he's not really working in the industry anymore. I agree that Lionmane is a great villain. He's just begging for a return engagement. I'm going to have to add him into my own little Hawkman project.

As for the Kirby-8000, maybe it's some kind of reference to the abominable way that Marvel was treating the King around this time, but I'm not sure what it means either.