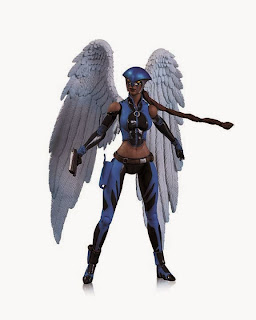 As I mentioned yesterday, the DC May 2104 solicits are posted, and we have this offering: Earth-2 Hawkgirl!

DC COMICS EARTH 2: HAWKGIRL, SUPERMAN AND BATMAN ACTION FIGURES
Based on the designs of the hit monthly comic book EARTH 2. Batman, Superman and Hawkgirl continue the battle against the hordes of Apokolips to protect all life on their Earth as they know it!
BATMAN - 6.75"
SUPERMAN - 6.75"
HAWKGIRL - 6.6"
EACH FIGURE SOLD SEPARATELY
* Action Figures * $24.95 US • On Sale August 2014 * Allocations May Occur

Kendra Saunders comes equipped with her pistol, and it looks like a working holster for it as well.  In her left hand, she appears to be holding her combat knife, but it is hard to see as the tip is pointing right at the camera.  The giveaway: the sheath on her right boot.  Her long ponytail is off to the side in the solicit image, but it's unclear what kind of articulation it has, if any.  It may just be on a ball joint in the back of her head, but if it was up to me I would make it a bendy piece.  The blue and black look nice, and the wings retain the angelic quality and coloring from when Nicola Scott first drew her a couple of years back.

The price is a bit steep compared to retail toys but these "adult collector" toys have been essentially at this price point for a while.  Trust me, the price of oil has really taken it's toll on the price of poly-plastics.

Not sure if I will pick her up or not.  I really like Kendra's new duds (the blue is such a twist from what one normally expects for a Hawk costume), but I have severely cut back my spending on toys... the $150 I dropped on X-Plus's vinyl Sanda and Gaira not withstanding.  But I have to admit, she would look super sharp on my Hawkman shelf!