This trading card is a part of DC's 1993 "Cosmic Teams" cardset. This set was interesting in that it was almost entirely focused on teams, as the name implied. Since Hawkman was a member of the then recently released from Limbo Justice Society of America (before Zero Hour where most of the team was killed or otherwise weirded up), he is featured on his own card, as well as on the Justice Society's triptych, which I will post another time. Note that he is called out as the Golden Age Hawkman. 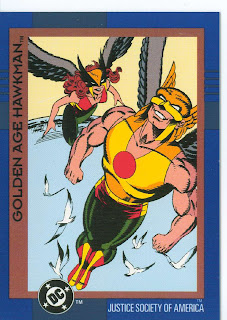 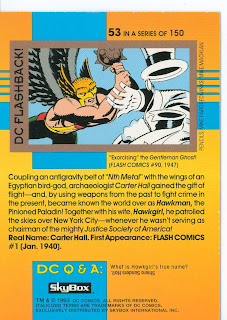 The card art is by none other than Mike Parobeck, who draws a pretty sweet pair of Hawks, I must admit! Maybe I can make a banner ouf of it or something.

That was a great set I never quite completed. Parobeck's great!

This is actually the only non Batman:TAS card set I own from DC. I always liked the design and look of the cards -- not as modernist as the Marvel Universe sets from the same time period, of which I have quite a few more. I'm pretty sure I have the first four series of Marvel Universe, the first two Marvel Masterpieces, and a couple others as well. I'll have to mine some of those for the Bunker at some point.

I loved the design of Cosmic Teams. DC's best looking set in that department. I still have a lot of those, including Power Chrome and the all-villain set that preceded Underworld Unleashed.