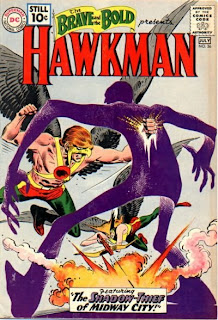 Summary: Mavis Trent makes a minotaur appear accidently when she reads an incantation from an ancient relic.  Later, the weirdness continues when Hawkman and Hawkgirl encounter and battle a legendary Phoenix in the skies over Hawk Valley.  The monsters are stealing items which, when combined, can be used to cast a powerful spell to give a sorcerer amazing powers.  But, local occult expert Konrad Kaslak dismisses this theory, saying that the monsters are just illusions created to cover the thief's tracks.  Hawkman and Hawkgirl don't buy it, and do battle with more monsters including a dragon, some centaurs, and Medusa herself, before finding the would-be wizard: Kaslak himself.  The Hawks put an end to his magical ways and recover the artifacts. Unconvinced, Hawkman and Hawkgirl attempt to intercede before the remaining two objects are also acquired, by battling a dragon, centaurs, and Medusa, as they deduce that Kaslak is the would-be sorcerer. They arrive just in time to prevent his spell from succeeding.

Review: A pretty unremarkable story, considering.  Kaslak is not compelling as a villian and there is little sense of threat to the Hawks from him.  The monsters summoned by him are more interesting, at least.  Mavis Trent continues to give the Silver Age Lois Lane a run for the money in the "bumbling girl" department.  Perfectly servicable "non-cover" story for the era, but not as high quality or memorable as similar stories -- such as those featuring the Flash from the same general time period.

Man, these old Hawkman stories are something else. Some time ago I decided that I should read some of the Silver Age stories that form the foundation for modern comics, and tracked a good number of the archives of the major characters and the JLA. The League's stories were horrendous, and SA Batman stuff is a joke. The Flash wasn't too bad, and Green Lantern had flashes of something better amid loads of dross...but Hawkman's stories were definitely some of the best. They were infinitely inventive, like a four color version of Jules Verne, foretelling everything from credit cards to ebay. His stories were also exciting, and generally had more drama than, say, the average League tale. I wish they'd put out a third volume, because I'd really like to read more of them!

As for this particular story, it is far from one of the best, but there is still pretty good potential there. One of the things I'd love to see is a restart of the DCU (at least in an alternate earth set of titles) in which a competent writer would retell some of these classic SA stories, giving them a bit more depth and weight.

Also, I may be in the vast minority on this, but I actually like Mavis Trent. Not THAT much, a little Mavis goes a long way, but she is a fun little wrinkle to Carter's universe. She constantly makes eyes at him IN FRONT OF HIS WIFE....that takes guts...especially considering Shayera could easily knock her into orbit. Ha, anyway, I'm enjoying your Hawk-coverage, so keep it up!